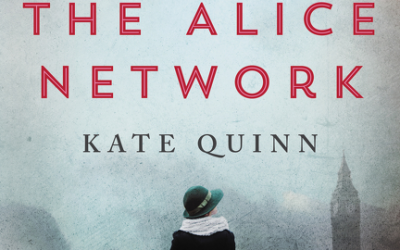 About the book, The Alice Network

In an enthralling new historical novel from national bestselling author Kate Quinn, two women—a female spy recruited to the real-life Alice Network in France during World War I and an unconventional American socialite searching for her cousin in 1947—are brought together in a mesmerizing story of courage and redemption.

1947. In the chaotic aftermath of World War II, American college girl Charlie St. Clair is pregnant, unmarried, and on the verge of being thrown out of her very proper family. She’s also nursing a desperate hope that her beloved cousin Rose, who disappeared in Nazi-occupied France during the war, might still be alive. So when Charlie’s parents banish her to Europe to have her “little problem” taken care of, Charlie breaks free and heads to London, determined to find out what happened to the cousin she loves like a sister.

1915. A year into the Great War, Eve Gardiner burns to join the fight against the Germans and unexpectedly gets her chance when she’s recruited to work as a spy. Sent into enemy-occupied France, she’s trained by the mesmerizing Lili, the “Queen of Spies”, who manages a vast network of secret agents right under the enemy’s nose.

Thirty years later, haunted by the betrayal that ultimately tore apart the Alice Network, Eve spends her days drunk and secluded in her crumbling London house. Until a young American barges in uttering a name Eve hasn’t heard in decades, and launches them both on a mission to find the truth…no matter where it leads.

About the author, Kate Quinn

Kate Quinn is a native of Southern California. She attended Boston University, where she earned bachelor’s and master’s degrees in classical voice. A lifelong history buff, she has written four novels in the Empress of Rome Saga and two books set in the Italian Renaissance detailing the early years of the infamous Borgia clan. All have been translated into multiple languages. She and her husband now live in Maryland with two black dogs named Caesar and Calpurnia.

Even in fiction there aren’t enough stories about female spies. Aside from Mata Hari, the only one I can think of is the Pink Carnation, the fictional character at the heart of Lauren Willig’s series which jumps off from The Scarlet Pimpernel.

The Alice Network is nothing like Willig’s novels. Rather, author Kate Quinn has given us a double story about a network of female spies operating during World War I & II. In the earlier time period, we meet Eve, strong, courageous, and determined. In the latter, the focus is on Charlie, brought to Europe by her parents to take care of a ‘little problem,’ of the type women have been quietly handling since the dawn of time.

She’s also searching for her cousin Rose, presumed dead, whom no one has  heard from in three years.

Inevitably, Charlie’s and Eve’s stories become intertwined, but even as the two get to know each other, and Charlie finds a place in the world of her own choosing, Eve’s story unwinds for us also.

Both women are intelligent, passionate, driven, and somewhat ‘damaged’ by what life has handed them, and both fight against the constraints that society puts on women. To me, it was fascinating to see what shifted between those two wars, and what remained the same. As well, it was interesting to consider what still hasn’t changed, in the years since then.

I found both characters to be quite engaging, dimensional women. Charlie, especially, is someone I’d love to share tea or coffee with, but all of Quinn’s creations felt like real people. Charlie’s mother made me laugh and cringe in the opening scenes – I think every young woman has a relative a little like her, or knows someone who does.

If you like meaty, gripping historical fiction with strong female characters and themes that echo down the years, you will love The Alice Network.

Goes well with a snack plate of sliced baguette with brie or Stilton cheese (depending on your taste), some olives, and a glass of red wine, followed by an espresso and a piece of dark chocolate.