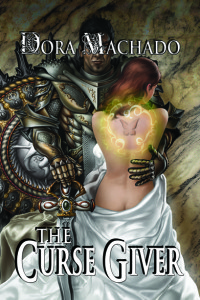 It’s been a while since I’ve read any real fantasy. I mean, yes, I’m slowly working my way through George R. R. Martin’s A Song of Ice and Fire series, but that world is reasonably similar to our own medieval history, with only a few ‘fantastic’ elements. I was in the mood for escapist reading this summer, however, so when the nice folks and Pump Up Your Book offered me the chance to read an epic fantasy novel, I jumped at the chance.

The problem with epic fantasy is that very often the fictional world feels as flat as a movie set, with no real depth or history. Dora Machado’s The Curse Giver, on the other hand, plunges us into a world so rich, and so well constructed, it feels almost as if we could step sideways into it. One of the early sections, particularly, when Lousielle and Bren are crossing the bog, had me squirming as much as if I was actually there with them avoiding creepy crawlies.

Her main characters are three dimensional, and Lousielle especially, was so smart and spunky that I wanted to be her best friend. Herb lore is something I’ve always been quietly interested in (witness the collection of herbals in my Word Lounge), so her affinity for plants and potions really drew me in.

Likewise, while Bren could have been Generic Quasi-medieval Noble #17, Machado made him complex and interesting (and gave him a great body, which we appreciate vicariously through Lousielle).

The other characters, good and evil alike, were, similarly, sketched with fine lines, not the broad strokes of generic fantasy.

I’ve read that Ms. Machado is bilingual, having grown up in the Dominican Republic, and I think some of the charm of The Curse Giver comes from her – probably unconscious – Spanish-influenced rhythms. It’s nothing you could point your finger to and say, “Look, that’s not typical English phrasing,” but a quiet undercurrent that makes the writing really SING.

(I am not bilingual, but I grew up in a New Jersey Neapolitan family where an Italian-English hybrid was the norm. As well, I’m a natural mimic, and my parents retired to Baja Sur, Mexico, about a decade ago, so those Latin-tinged rhythms are familiar to me.)

Overall, I thought The Curse Giver was a delicious read, and it’s compelled me to seek out more of Machado’s work. I think it’s an especially good choice for women who like epic fantasy, but have gotten out of the habit of reading it.

Review: The Curse Giver by Dora Machado by Melissa Bartell is licensed under a Creative Commons Attribution-NonCommercial-ShareAlike 4.0 International License.

3 thoughts on “Review: The Curse Giver by Dora Machado”