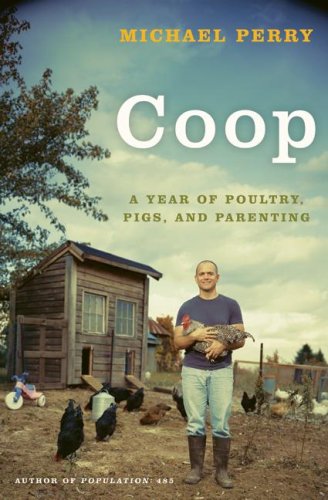 Coop: a Year of Poultry, Pigs, and Parenting
Michael Perry
Harper, 368 pages
Get it from Amazon >>

I wasn’t going to post any kind of review of Coop here, but I love Michael Perry’s writing so much that I couldn’t not.

In this, the third of his collection of memoirs about his adult life in rural Wisconsin, Perry writes about everything from becoming a parent, both to a stepdaughter (he refers to her as a “given” daughter) and to a new baby girl, to raising hogs to building the titular chicken coop, which project becomes the recurring theme in the book.

As always, Perry’s description of his own carpentry skills is self-deprecating at best, and whether he’s discussing the way he salvaged windows from his previous home for the coop or talking about industrial hand wheels, he’s funny and engaging, and also makes you want to reach into the pages of his book and just offer a hand.

He’s also unabashedly proud of and impressed by the women in his life – and it is that directness and admiration that makes Coop a great gift for a mother, daughter, wife, or friend. It’s not typical chick-lit, not even close, but his writing is so easygoing that reading this book with a cup of coffee on the back porch is something every woman I know would likely enjoy.

I mean, I read it that way, alternating coffee and sips of iced tea, lightly sweetened with local honey.

I’m not sure if Perry has another book planned next, or if he’s going to concentrate on music for a bit, but I eagerly await his next words.

And you should, too.