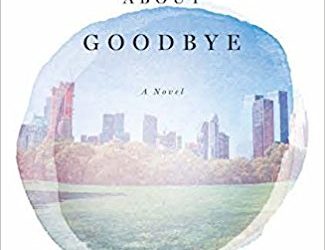 About the book The Truth About Goodbye Sebastian Hart has dealt with a lifetime of goodbyes. And now, a year after his husband Frank’s death, the forty-year-old chorus boy still blames himself. After all, Sebastian started the argument that night over one of Frank’s former date items, someone younger than Sebastian who still wanted Frank.

Challenged by his best friend, the quirky ex-Rockettes dancer Chloe, Sebastian struggles toward his dream of becoming a choreographer and grapples with romantic feelings for Reid, a new student in his tap class.

Ultimately, Sebastian begins to wonder whether it’s his imagination, or not, that Frank’s ghost is here, warning him that he daren’t move on with another love. He questions the truth: Is death really the final goodbye?

Buy, read, and discuss The Truth About Goodbye:

About the author, Russell Ricard

Russell Ricard is a veteran musical theater performer who s appeared in regional, national, and international productions and on Broadway. He received his MFA in creative writing from The New School. The Truth About Goodbye is his debut novel. He lives in Forest Hills, NY, with his husband, cat, and a lovingly supportive stand-up desk named Ruth.

Wow! Did I love what the book actually was – a funny, poignant look at how one man (Sebastian) faces the loss of his husband (Frank), the fact that he’s a gay man entering his forties – and one who is a Broadway chorus boy, at that, and the fear we all have as age and infirmities start to become ever more present in our circles of friends and loved ones:

Am I worthy? Am I still able to contribute? Am I meant to be alone?

Of all, I think the last is the most powerful question, and in this book, author Russell Ricard handles the subject with just the right mix of humor and grace.

I loved Sebastian, dear neurotic Sebastian, from the first page, and Chloe, his best friend, is such a great person. She goads him, coddles him, orders him around and, most importantly, listens to him, and I felt that their friendship was as much the heart of he story as Sebastian’s aching for his lost husband.

Sebastian’s life was peopled with other fantastic characters, though.  From his overweight tuxedo cat to Mrs. Woo who plays piano for his tap dance class at the community center, to Greg, the younger, fitter chorus boy who had a thing with (ages past) and for Frank, we continually meet characters who leap of the page, pirouette around and then resettle in their rightful places in the narrative, waiting for their next call. While some of those characters are more outrageous than others, all feel vivid and real, like people you really would meet if you were a member of the theatre community in New York.

It saddens me that potential readers may notice that the protagonist in this book is gay, and choose not to ready it, because The Truth About Goodbye is a brilliant piece that eloquently conveys the pain of losing your spouse, your partner, your best friend, and then having to rebuild your life without that person. The details are specific, and Ricard has painted them with a deft hand, but the emotions are universal.

I have to add that there was an added layer of emotion reading this during the current presidential administration, which is filled with such hate and meanness, when so much of it took place around the time gay marriage was becoming legal in more and more states of our union.

Goes well with cocktails! The kind with little umbrellas in them.

Monday, May 22nd: From the TBR Pile