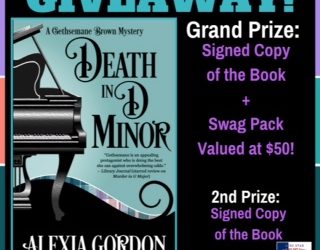 About the book, Death in D Minor Gethsemane Brown, African-American musician and expatriate to an Irish village, solved a string of murders and got used to living with a snarky ghost. She can rest easy now. Right? Wrong. The ghost has disappeared, her landlord’s about to sell to a developer, and her brother-in-law’s come to visit. She scrambles to call her spectral roomie back from beyond and find a way to save the cottage from destruction. But real estate takes a backseat when her brother-in-law is accused of stealing a valuable antique. Gethsemane strikes a deal with an investigator to go undercover at a charity ball and snoop for evidence of a forgery/theft ring in exchange for the woman’s help clearing him. At the party, she accidentally conjures the ghost of an eighteenth-century sea captain, then ends up the prime suspect in the party host’s murder. She races to untangle a web of phony art and stolen antiques to exonerate herself, then the killer targets her. Will she bring a murderer to justice, or will her encore investigation become her swan song?

Praise for Death in D Minor

Gethsemane Brown drinks whiskey. Bushmills 21yr is her favorite but Waddell and Dobb Double-Oaked 12yr Reserve Single Barrel bourbon is a close second. I believe in researching what I write about so I studied whiskey. I learned about distillation and aging, the difference between whisky, whiskey, and bourbon, the meaning of terms like single barrel and single malt. The best part of my research my hands-on study of taste. Call it field work. If Gethsemane Brown was going to drink whiskey, I was, too. (Don’t worry, Mom, I don’t overdo it. And I never drink and drive.) I learned that not all whiskies taste the same, that some are better for mixing in cocktails and some for sipping unadorned, and that they pair with food the same way wine does. I also I play favorites. My top five:

About the Author, Alexia Gordon Murder in G Major won the Lefty Award for Best Debut Novel, was nominated for an Agatha Award for Best New Novel, and was selected one of Suspense Magazine’s Best Debuts. I listen to classical music, drink whiskey, and blog at www.missdemeanors.com, voted one of Writers’ Digest magazine’s 101 best websites for writers, and featured on Femmes Fatales.