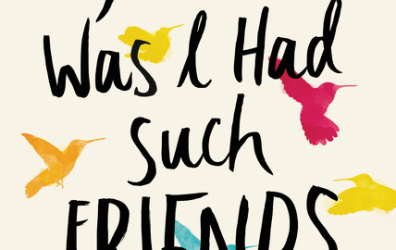 About the book, My Glory Was I Had Such Friends

In this moving memoir about the power of friendship and the resilience of the human spirit, Amy Silverstein tells the story of the extraordinary group of women who supported her as she waited on the precipice for a life-saving heart transplant.

Nearly twenty-six years after receiving her first heart transplant, Amy Silverstein’s donor heart plummeted into failure. If she wanted to live, she had to take on the grueling quest for a new heart—immediately.

A shot at survival meant uprooting her life and moving across the country to California. When her friends heard of her plans, there was only one reaction: “I’m there.” Nine remarkable women—Joy, Jill, Leja, Jody, Lauren, Robin, Valerie, Ann, and Jane—put demanding jobs and pressing family obligations on hold to fly across the country and be by Amy’s side. Creating a calendar spreadsheet, the women—some of them strangers to one another—passed the baton of friendship, one to the next, and headed straight and strong into the battle to help save Amy’s life.

Empowered by the kind of empathy that can only grow with age, these women, each knowing Amy from different stages of her life, banded together to provide her with something that medicine alone could not.  Sleeping on a cot beside her bed, they rubbed her back and feet when the pain was unbearable, adorned her room with death-distracting decorations, and engaged in their “best talks ever.”  They saw the true measure of their friend’s strength, and they each responded in kind.

My Glory Was I Had Such Friends is a tribute to these women and the intense hours they spent together—hours of heightened emotion and self-awareness, where everything was laid bare. Candid and heartrending, this once-in-a-lifetime story of connection and empathy is a powerful reminder of the ultimate importance of “showing up” for those we love.

Buy, read, and discuss, My Glory Was I Had Such Friends About the author, Amy Silverstein

Amy Silverstein is the author of Sick Girl, which won a “Books for a Better Life Award” and was a finalist for the Border’s Original Voices Award. She earned her Juris Doctor at New York University School of Law, has served on the Board of the United Network of Organ Sharing (UNOS), and is an active speaker and writer on women’s health issues and patient advocacy. She lives in New York.

Memoirs are always tricky things to review, at least for me, because it feels a little like you’re judging the author’s life, rather than their writing and storytelling skills. In the case of My Glory Was I Had Such Friends, though, I had to keep reminding myself that this is a memoir, because the writing is so tight, the voice so consistent, and the storytelling so well-paced that it reads like a novel.

Silverstein is candid in telling her story. I haven’t read her previous book, Sick Girl, but I’m guessing her tone was similar in that: upbeat, despite the description of sometimes-grim events, a little bit snarky, a little bit self-deprecating, a lot poignant…

What really struck me, though, is that Silverstein’s book is full of joy.

Obviously when writing a story about life-threatening heart issues and the race between remaining beats in your existing heart and time to be hooked up with a new organ ready for transplant, you’re going to be joyful just for having survived it (spoiler: she lived, and wrote this book). But the sense of joy I felt while reading this was more than that. It was the sense that every friend mentioned in this memoir, these women (including one actually called Joy) who took chunks of their lives to support the author through a harrowing experience, both gave Amy strength and comfort, but also received the same.

It is my hope that most of us will never have to get so close to a ‘premature’ death that we’re not just looking it in the eye, but smelling its foul breath (seriously, does death floss?) , but if we do, we should all be so lucky as to have friends like Amy’s, and like Amy herself, because it’s clear from this memoir that her friendships go both ways.

Deadline is 11:59 PM CDT on Thursday, July 20th. Winner will be notified by email.

Monday, July 10th: Thoughts On This ‘n That