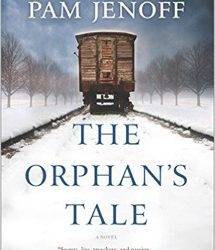 About the book,  The Orphan’s Tale

A powerful novel of friendship set in a traveling circus during World War II, The Orphan’s Tale introduces two extraordinary women and their harrowing stories of sacrifice and survival

Sixteen-year-old Noa has been cast out in disgrace after becoming pregnant by a Nazi soldier and being forced to give up her baby. She lives above a small rail station, which she cleans in order to earn her keep… When Noa discovers a boxcar containing dozens of Jewish infants bound for a concentration camp, she is reminded of the child that was taken from her. And in a moment that will change the course of her life, she snatches one of the babies and flees into the snowy night.

Noa finds refuge with a German circus, but she must learn the flying trapeze act so she can blend in undetected, spurning the resentment of the lead aerialist, Astrid. At first rivals, Noa and Astrid soon forge a powerful bond. But as the facade that protects them proves increasingly tenuous, Noa and Astrid must decide whether their friendship is enough to save one another—or if the secrets that burn between them will destroy everything.

Pam Jenoff is the author of several novels, including the international bestseller The Kommandant’s Girl, which also earned her a Quill Award nomination. Pam lives with her husband and three children near Philadelphia where, in addition to writing, she teaches law school.

As I was reading this novel, The Orphan’s Tale, one word kept coming back to me: grace. Because this book, this story, is full of grace in every sense of the word.

It has the “there but for the grace of god” moments, but it also has the kind of grace that allows for sacrifices between friends. And then, when you add in the art and artistry both of a young lover who wants to be a painter, and the circus folk who work on wires and trapezes, you have that other, more physical kind of grace – the one that expands into people being graceful.

This story of Noa and Astrid, two very different women whose lives converge and then separate during one of the bleakest parts of human history – World War II – is more than just a novel. It’s a glimpse at a piece of history we don’t often hear about. We know that people “hid” Jews on farms and in attics, and in the music and theatre worlds, but the circus? Most of the stories that involve the circus have little to do with the political climate.

Exploring such a human story from this point of view made a novel that could, in a less talented writer’s hands,  have been another us-against-the-Nazi’s tear-jerker into a story that had added depth and life beyond the actual characters. I learned something new, and was compelled to do my own reading outside the novel because I was fascinated.

(I should add that I’ve been fascinated by the circus since forever, so it’s not surprising that this was the element that truly hooked me.)

Aside from that, though, Jenoff writes with a deft hand. Her characters feel like real people, flawed and beautiful in their simple humanity, and her settings, based on real places, are described in enough detail to make you feel as if you are there, stepping through time to see the horror of a train-car full of nameless, crying babies, or the magic of someone sailing through the air on a trapeze.

Jenoff’s lyrical style only adds to the effect. At times it was like looking through a mirror into a past that isn’t necessarily pretty, but is still vivid.

This novel is a must-read for fans of historical fiction, but I’d recommend it to almost anyone who just wants to immerse themselves in a truly compelling story.

Goes well with a cappuccino and a bar of dark chocolate, eaten one tiny shard at a time.

Follow the Excerpt Tour, and Mark Your Calendar for the Review Tour

Friday, March 24th: Not in Jersey

h J R
Melissa A. Bartell @melysse RT @MilesToGo13: Kellyanne storms out of a press briefing. Pompeo locks a reporter in his office and aggressively melts down. Trump tel…