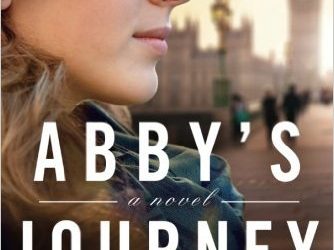 About the book, Abby’s Journey Twenty-year-old Abigail Turner has only known her mother, Claire—who died shortly after she was born—through letters, videos, postcards, and journals. Abby’s father, Josh, has raised his precious daughter himself, but his overprotectiveness has become stifling. Abby longs to forge out on her own and see the world after a childhood trapped indoors: she suffers from bronchopulmonary dysplasia, which means a case of the sniffles can rapidly escalate into life-threatening pneumonia.

But when Abby’s doctor declares her healthy—for now—her grandmother Millie whisks her away to Europe to visit the Christmas markets that her mother cherished and chronicled in her travel journals. Despite her father’s objections, Abby and Millie embark on a journey of discovery in which Abby will learn secrets that force her to reevaluate her image of her mother and come to a more mature understanding of a parent-child bond that transcends death.

New York Times and USA Today bestselling author Steena Holmes offers a tender and heartfelt exploration of parental love and a daughter’s longing for connection in the poignant next chapter following Saving Abby.

About the author, Steena Holmes After writing her first novel while working as a receptionist, Steena Holmes made her dream of being a full-time writer a reality. She won the National Indie Excellence Book Award in 2012 for her bestselling novel Finding Emma. Now both a New York Times and USA Today bestselling author, Steena continues to write stories that touch every parent’s heart in one way or another. To find out more about her books and her love for traveling, you can visit her website at www.steenaholmes.com or follow her journeys over on Instagram @steenaholmes.

Abby’s Journey is the sequel to another novel by Steena Holmes, Saving Abby, but while the first book does provide context, it’s not necessary to read one in order to enjoy the other.

In many ways, Abby’s Journey is a typical coming-of-age story. Yes, the title character is twenty, not a teenager, but she’s lived a sheltered life as the combined result of life-long health issues and a doting widowed father. Still, she’s taking control of her own life for the first time, and watching the way her interactions with people and the world change is really fascinating.

Overall, this is a gentle story… a family drama with Abby at the center, punctuated by letters written by her dead mother, Claire, in the months before Abby was born. The characters all feel very real, especially Abby, her best friend/godmother Sam, her father, Josh, and her grandparents. (I had a great aunt named Millie, so seeing that name was especially heartwarming for me.)

I loved the use of letters, blog entries, and postcards within this story, even though it wasn’t really an epistolary novel, and I truly loved the way Holmes’s contemporary writing style is both accessible and very vivid.

More than reading a novel, I felt as though I was taking Abby’s journey with her, following her footsteps first into her snowy back yard, and later, onto a plane and to Germany during the tradition pre-Christmas festivities.

Friday, March 3rd: Not in Jersey

Monday, March 13th: Thoughts on This ‘n That

About the book, The Chilbury Ladies’ Choir “Just because the men have gone to war, why do we have to close the choir? And precisely when we need it most!”

As England enters World War II’s dark early days, spirited music professor Primrose Trent, recently arrived to the village of Chilbury, emboldens the women of the town to defy the Vicar’s stuffy edict to shutter the church’s choir in the absence of men and instead “carry on singing.” Resurrecting themselves as “The Chilbury Ladies’ Choir,” the women of this small village soon use their joint song to lift up themselves, and the community, as the war tears through their lives.

Told through letters and journals, THE CHILBURY LADIES’ CHOIR moves seamlessly from budding romances to village intrigues to heartbreaking matters of life and death. As we come to know the struggles of the charismatic members of this unforgettable outfit– a timid widow worried over her son at the front; the town beauty drawn to a rakish artist; her younger sister nursing an impossible crush and dabbling in politics she doesn’t understand; a young Jewish refugee hiding secrets about her family, and a conniving midwife plotting to outrun her seedy past– we come to see how the strength each finds in the choir’s collective voice reverberates in her individual life. In turns funny, charming and heart-wrenching, this lovingly executed ensemble novel will charm and inspire, illuminating the true spirit of the women on the homefront, in a village of indomitable spirit, at the dawn of a most terrible conflict.

About the author, Jennifer Ryan

Jennifer Ryan lives in the Washington, D.C., area with her husband and their two children. Originally from Kent and then London, she was previously a nonfiction book editor.

I’ve spent a lot of years in church choirs of various flavors. I’ve been in the choir of an Episcopalian church with a director who was such an amazing musician that if a piece of music didn’t work for our voices, he would simply write a new arrangement. I’ve also been in a UU choir where the director made us rehearse a capella to force us to truly listen to each other.

Many people erroneously believe that the point of choral singing is to blend everyone’s voice into one homogeneous sound, but the real goal is for each voice to harmonize, so that many individual voices combine into new sounds. Sometimes they’re unison, sometimes the separate notes – the separate voices – are meant to be heard.

In this lovely novel, The Chilbury Ladies’ Choir, Jennifer Ryan has done the latter. She has created a collection of individual voices – a young window, a refugee, the church ladies you expect to find in such a setting, and she has given them solid unison pieces in which they blend – their determination to keep their choir alive with all the men gone – but she has also let their individual talents shine.

Epistolary novels can be tricky – it’s much harder to maintain the distinctions between characters when so much of the story is in first-person accounts – but Ryan has done so deftly. I felt immersed in these women’s lives, enjoying their triumphs and shedding tears at their  sorrows.

Each of the women whose voices we hear in this novel are distinct personalities, with loves and fears and wants and desires, and each one has a compelling story that, when blended together forms a chorus of voices painting a word-picture of their village in a specific period of time.

Many people have compared this novel to The Guernsey Literary and Potato Peel Pie Society, me included, but though they share a similar period, The Chilbury Ladies’ Choir is vastly different – it’s more candid, more personal, and more rooted in feminine sensibilities. Still, if you liked one, you’ll probably enjoy the other. I did.

Goes well with shortbread biscuits and hot tea, maybe with a splash of whiskey in it.