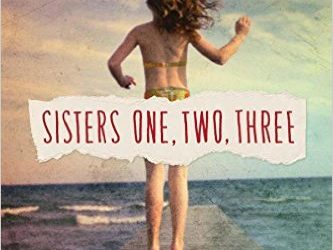 About the book, Sisters One, Two, Three After a tragic accident on Martha’s Vineyard, keeping secrets becomes a way of life for the Tangle family. With memories locked away, the sisters take divergent paths. Callie disappears, Mimi keeps so busy she has no time to think, and Ginger develops a lifelong aversion to risk that threatens the relationships she holds most dear.

When a whispered comment overheard by her rebellious teenage daughter forces Ginger to reveal a long-held family secret, the Tangles’ carefully constructed web of lies begins to unravel. Upon the death of Glory, the family’s colorful matriarch, and the return of long-estranged Callie, Ginger resolves to return to Martha’s Vineyard and piece together what really happened on that calamitous day when a shadow fell over four sun-kissed siblings playing at the shore. Along with Ginger’s newfound understanding come the keys to reconciliation: with her mother, with her sisters, and with her daughter.

At turns heartbreaking, humorous, and hopeful, Sisters One, Two, Three explores not only the consequences of secrets—even secrets kept out of love—but also the courage it takes to speak the truth, to forgive, and to let go.

About the author, Nancy Star Nancy Star is the author of four previous novels: Carpool Diem, Up Next, Now This, and Buried Lives. Her nonfiction writing has appeared in the New York Times, Family Circle, Diversion magazine, and on the web. Before embarking on her writing career, Nancy worked for more than a decade as a movie executive in the film business, dividing her time between New York and London. She has two grown daughters and a son-in-law and now lives in New Jersey with her husband.

I love a good family drama, and if it’s connected to anything remotely beachy, that only increases my enjoyment, so you can imagine that I leaped at a chance to read and review Sisters One, Two, Three.

The Tangle family (aptly named, because their lives and secrets are all a giant, tangled ball of confusion, contradiction, affection, and family bonds) quickly found their way into my heart and my head, as their secrets, both big and small, were revealed to us.

Nancy Star does an amazing job at peeling away the onion-layers of family connections. Perhaps it’s because I’m an only child that I am so drawn to stories of people who are not, but I was enraptured by the bond each of the sisters had for each other, and intrigued by the way each of them was both independent, but also part of a whole.

This is a perfect January novel. It’s a palate cleanser after all the sweetness of last month’s holidays, at once tender and bracing (yes, it’s possible to be both) and it’s also a reminder that even the best families have their issues.

Friday, January 20th: Not in Jersey

Monday, January 23rd: Thoughts on This ‘n That

Melissa A. Bartell @melysse RT @JamesMarlowe19: Okay, my first Tweet ever. Just did a fun video with my pal @RobertPicardo and event wiz @edward_perotti a tribute to o…