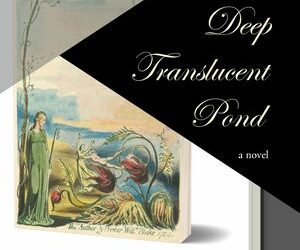 About the book, The Deep Translucent Pond

In The Deep Translucent Pond, a 40 year old attorney, Jerome Konigsberg, and 30 year old nurse, Natalija Gasper, are winners of poetry fellowships which allow them rare access to a once famous, now reclusive poet with the nom de plume, The Black Magus. At their first meeting the Black Magus “hijacks” the fellowship, proclaiming it the final piece of a secretive ten-year project known as the Triangulum, its goal: The re-enchantment of the world.

The key to re-enchantment is The Deep Translucent Pond which the Black Magus has identified as “a hideout of the fugitive gods.” If he can reach into it—as placid as a reactor cooling pool—and retrieve a mysterious object from the bottom, re-enchantment will be ignited. He elaborately recruits his two fellowship “students” to help. For their part, they accommodate his severe eccentricities in exchange for flashes of insight into their lives and a feeling that he is guiding them to a higher place. About the author, James Shelley

James Shelley has spent his professional life shifting between the underworld and higher places. He’s been a psychiatric attendant, land surveyor, arts critic, mental health case worker, archivist for the Rockefellers, and a bagpiper playing at the funerals of men and women he’s never met. As an educator, his innovative work at an Ohio college supporting at-risk male students has attracted national media attention, including The Atlantic and NPR.
As a writer, Shelley started out writing plays for experimental theatre before shifting to fiction, early efforts earning him an Ohio Arts Prize. In his poetry and fiction, he has always been fascinated with how prosaic moments can unexpectedly transcend, expanding into spaces that were not there before.

I’m woefully late in posting this review, but it’s because my life has been chaotic lately. The Deep Translucent Pond is an engaging and interesting novel that explores the process of writing, but also shows us how writing helps us process change and growth as well. Three characters: The Black Magus (not his real name, obviously) is an aging recluse who was once a famous poem. Every year he takes on two students and in this year the lucky two are Jerome, an attorney, and Natalija, a nurse. The three meet initially at a local cafe, but subsequent meetings are at the Magus’s home, where they sit in the shape of a triangle.

When the Magus called attention to an image of The Last Supper, I was very concerned this novel would be an imitation of The DaVinci Code, but it was not. Instead, that image was used to show off the power of triangles and pyramids, which continues to be a theme throughout the story. “A pyramid cannot be pushed over,” the Magus states, and what is implied is that the three of them will, over the course of their work together, form a cohesive whole.

In addition to the physics and metaphysics of triangles and pyramids, this novel explores the concept of finding our purpose – our true calling – in life, and how engaging that purpose can change – or in this case enchant the world. Similarly, author James Shelley enchants his readers. His use of dialogue is specific and appropriate to each character, and he has also created the poems (dubbed writings) of each character as well. Shelley has also chosen different focal characters for each chapter, which gives us different perspectives on the other two. In a way, the setup is reminiscent of Sartre’s No Exit, except that this novel is set on contemporary earth, and these characters genuinely like each other. Perhaps, then, every such triangle – or Triangulum – will have such a superficial similarity.

Where this book shines most is with the exploration of the writer and their writings, and how each informs the other. It’s a worthy read for artists, writers, and anyone who appreciates both.