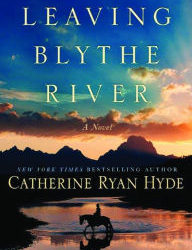 About the book,  Leaving Blythe River Seventeen-year-old Ethan Underwood is totally unprepared to search for his father in the Blythe River National Wilderness. Not only is he small, scrawny, and skittish but he’s barely speaking to the man after a traumatic betrayal. Yet when his father vanishes from their remote cabin and rangers abandon the rescue mission, suddenly it’s up to Ethan to keep looking. Angry or not, he’s his father’s only hope.

With the help of three locals—a fearless seventy-year-old widow, a pack guide, and a former actor with limited outdoor skills—he heads into the wild. The days that follow transform Ethan’s world. Hail, punishing sun, swollen rapids, and exhausting pain leave him wondering if he’s been fooled yet again: Is his father out here at all? As the situation grows increasingly dire, Ethan realizes this quest has become about more than finding his dad.

From the bestselling author of Pay It Forward comes a story of nature revealing human nature—the trickiest terrain. Navigating an unforgiving landscape, Ethan searches himself for the ability to forgive his father—if he finds him alive. Catherine Ryan Hyde is the author of thirty published and forthcoming books. Her bestselling 1999 novel Pay It Forward, adapted into a major Warner Bros. motion picture starring Kevin Spacey and Helen Hunt, made the American Library Association’s Best Books for Young Adults list and was translated into more than two dozen languages for distribution in more than thirty countries. Her novels Becoming Chloe and Jumpstart the World were included on the ALA’s Rainbow List; Jumpstart the World was also a finalist for two Lambda Literary Awards and won Rainbow Awards in two categories. More than fifty of her short stories have been published in many journals, including the Antioch Review, Michigan Quarterly Review, the Virginia Quarterly Review, Ploughshares, Glimmer Train, and the Sun, and in the anthologies Santa Barbara Stories and California Shorts and the bestselling anthology Dog Is My Co-Pilot. Her short fiction received honorable mention in the Raymond Carver Short Story Contest, a second-place win for the Tobias Wolff Award, and nominations for Best American Short Stories, the O. Henry Award, and the Pushcart Prize. Three have also been cited in Best American Short Stories.

Catherine Ryan Hyde is an excellent writer. She sets vivid scenes and her characters are well-drawn. Her work, which I consider to be literary fiction, always delves into the human psyche in interesting ways.  So, maybe it’s my failing because while I appreciated the care and craft that went into this book, and enjoyed the supporting characters in the novel (especially crotchety old Jone) I found that I had a difficult time connecting to this novel in any meaningful way. This surprised me, because when I read and reviewed The Language of Hoofbeats a couple of years ago, I loved it.

The story in this novel is fairly typical – a city boy watches his parents’ marriage dissolve in front of his eyes, and after his parents finally split, he’s sent off to live with his father, in a rented A-frame on the fringes of a national part, while his mother is traveling.

Ethan, the boy in question, is our POV character, but I had a problem sympathizing with him. Maybe I just don’t ‘get’ teenage boys, or maybe I just didn’t like the character, but even though he went through some rough issues – getting mugged, for example – I felt like a lot of what happened was because he made low-percentage choices way too frequently. I wanted him to blow up at his father, and at least communicate, and he never really did, and I think, because I am the kind of person who blows up (but then I’m done, I don’t let things linger) I couldn’t related.

Then there are his parents… his mother never really felt like a fully-realized character to me, but then, she’s not really a main character, more like a means to an end. It’s clear that Ethan recognizes that his mother loves him. But there was just something off about him.

Ethan’s father, I wanted to shake until his brain rattled. With this character, author Hyde did her job too well – creating a character who was so self-entitled and oblivious that it provoked a strong reaction from me, but I couldn’t feel sorry for him, even after he disappeared.

I did, at some point, want to give poor Ethan a hug.

Bottom line: There are some great character moments in this novel, and the story is well written and well constructed, but I had a hard time connecting with it.

Tuesday, May 24th: Peeking Between the Pages

Wednesday, June 15th: The Magic All Around Us

Thursday, June 30th: I’d Rather Be at the Beach

h J R
Melissa A. Bartell @melysse Rainy days and beef stew go so well together. Yes, I dusted it with a bit of Parmesan cheese. #whatsfordinner #scratchkitchen https://t.co/UqPyWZZVJ9 https://t.co/PCPlv2t7NO

h J R
Melissa A. Bartell @melysse @Writer_Jenn I had fun reading it.