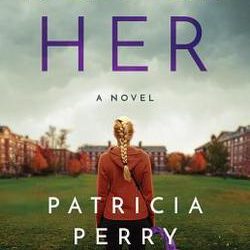 About the book, Deliver Her On the night of Alex Carmody’s sixteenth birthday, she and her best friend, Cass, are victims of a terrible car accident. Alex survives; Cass doesn’t. Consumed by grief, Alex starts cutting school and partying, growing increasingly detached. The future she’d planned with her friend is now meaningless to her.

Meg Carmody is heartbroken for her daughter, even as she’s desperate to get Alex’s life back on track. The Birches, a boarding school in New Hampshire, promises to do just that, yet Alex refuses to go. But when Meg finds a bag of pills hidden in the house, she makes a fateful call to a transporter whose company specializes in shuttling troubled teens to places like The Birches, under strict supervision. Meg knows Alex will feel betrayed—as will her estranged husband, who knows nothing of Meg’s plans for their daughter.

When the transport goes wrong—and Alex goes missing—Meg must face the consequences of her decision and her deception. But the hunt for Alex reveals that Meg is not the only one keeping secrets.

Buy, read, and discuss Deliver Her.

About the author, Patricia Perry Donovan Patricia Perry Donovan is an American journalist who writes about healthcare. Her fiction has appeared at Gravel Literary, Flash Fiction Magazine, Bethlehem Writers Roundtable and in other literary journals. The mother of two grown daughters, she lives at the Jersey shore with her husband.

In the endless onslaught of political ads, political opinions on facebook, and political arguments seemingly everywhere, I spent this last weekend engaging in some serious self-care. How? I took a bubble bath. I binge-watched the supernatural show Haven on Netflix, and a read three novels. One of them was Deliver Her, and it was fantastic.

Told in alternating points of view from Alex, a sixteen-year-old girl who was in a car accident the night of her sweet-sixteen, and which resulted in the loss of her best friend, Meg, Alex’s mother, currently separated (in situ, as the economy doesn’t allow them to afford separate residences) from Jacob, her husband, and Carl, a recovered addict/alcoholic who runs a business transporting troubled teenagers to their rehab programs, this is a book that straddles the line between contemporary family drama and serious literary fiction (not that the two can’t be the same).

I felt that author Patricia Perry Donovan captured Alex’s voice really well. She seemed like the teenager I once was, and like the sullen or troubled teenagers I’ve known: hot and cold emotions, moods, etc., angry one moment, trying so hard to be an adult, but at the same time, not wanting to truly leave childhood behind.

Meg was the character I most identified with, even though I’ve never had children, and am fortunate to have a solid marriage (we fight, of course, because we’re both human beings with opinions, but we’ve never gotten to the point of considering an ending). Still watching her marriage crumble was both moving and fascinating. I found myself empathizing with her, but also feeling great sympathy for Jacob.

Carl, on the other hand, I’d have loved to have a whole novel about. Complex, funny, smart, caring – that he turned his addiction and recovery into a way to help others, I found to be very moving.

Like many people, I was initially under the impression that this novel would be a boarding school story, focusing on Alex. Instead it was a deeply moving, incredibly rich read about the literal journey  –  Delivering Alex to The Birches – and the spiritual one of the entire Carmody family as well as Carl.

If you like family dramas like This is Us, you will love this novel. When it comes to a great story, Deliver Her really delivers.

One person in the U.S. or Canada will win a copy of Deliver Her. How? There are three ways to enter: