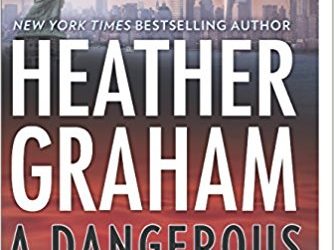 About the book, A Dangerous Game

Wrapping up a normal day at the office, criminal psychologist Kieran Finnegan is accosted by a desperate woman who shoves an infant into her arms and then flees, only to be murdered minutes later on a busy Manhattan street.

Who was the woman? Where did the baby come from? Kieran can’t stop thinking about the child and the victim, so her boyfriend, Craig Frasier, does what any good special agent boyfriend would do—he gets the FBI involved. And asks Kieran to keep out of it.

But the Finnegans have a knack for getting into trouble, and Kieran won’t sit idle when a lead surfaces through her family’s pub. Investigating on her own, she uncovers a dangerous group that plays fast and loose with human lives and will stop at nothing to keep their secrets—and they plan to silence Kieran before she can expose their deadly enterprise. New York Times and USA Today bestselling author Heather Graham has written more than a hundred novels. She’s a winner of the RWA’s Lifetime Achievement Award, and the Thriller Writers’ Silver Bullet. She is an active member of International Thriller Writers and Mystery Writers of America.

I always enjoy Heather Graham’s work, and A Dangerous Game is no exception. It’s the third installment in her “New York Confidential” series, but even though I haven’t read the first two books in this trilogy, I had no problem following the backstories of the existing characters. In fact, one of the things I really liked was that when Graham writes intimate scenes between protagonist Kieran Finnegan and her boyfriend Craig Fraiser, they really show the comfort of an established relationship without feeling boring or stale.

Graham is equally deft at  writing intricate, fast-paced plots and vivid characters. The joy of reading something that’s part of a series is that the world you enter is rich and layered without the need for a ton of setup. The heart of the novel – the pub owned by Kieran and her brothers – was so well drawn that I found my mouth watering for shepherd’s pie, and I could hear the clanging of silverware and the driving beat of Irish rock music.

This isn’t ‘just’ a romance novel, however, it’s also a mystery, and that part of the book is never forgotten, nor is plot sacrificed for character moments that wouldn’t make sense.

Graham has given us another novel to devour – that’s really the way her books are best enjoyed – and, as always, I find that the experience was both entertaining and incredibly satisfying.

Goes well with Irish stew served with brown bread and a glass of hard cider.

Monday, March 5th: What is That Book About

TBD: A Fortress of Books