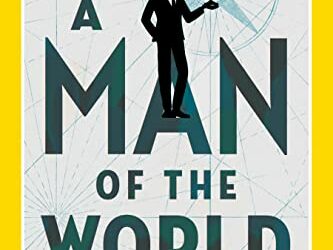 About the book, A Man of the World The captivating inside story of the man who helmed National Geographic for six decades is a front-row seat to audacious feats of exploration, from the successful hunt for the Titanic to Jane Goodall’s field studies. Offering a rare portrait of one of the world’s most iconic media empires, this revealing autobiography makes an impassioned argument to know―and care for―our planet.

Though his career path had been paved by four generations of his family before him, Gilbert M. Grosvenor left his own mark on the National Geographic Society, founded in 1888 and recognized the world over by its ubiquitous yellow border. In an unflinchingly honest memoir as big as the world and all that is in it, Grosvenor shows us what it was like to “grow up Geographic” in a family home where explorers like Robert Peary, Louis Leakey, and Jane Goodall regularly crossed the threshold. As staff photographer, editor in chief and then president of the organization, Grosvenor oversaw the diversification into television, film, books, as well as its flagship magazine, which under his tenure reached a peak circulation of nearly 11 million. He also narrates the shift from a nonprofit, family-focused enterprise to the more corporate, bottom-line focused world of publishing today.

For Grosvenor, running National Geographic wasn’t just a job. It was a legacy, motivated by a passion not just to leave the world a better place, but to motivate others to do so, too. Filled with world travel, charismatic explorers, and the complexities of running a publishing empire, A MAN OF THE WORLD is the story of one man, a singular family business, and the changing face of American media.

About the author, Gilbert. M. Grosvenor

Gilbert Melville Grosvenor is the former president and chairman of the National Geographic Society, after having served as the editor of National Geographic magazine from 1970 to 1980. The great-grandson of Alexander Graham Bell and the third Grosvenor to serve as editor-in-chief of the magazine, Grosvenor has received 14 honorary doctorates and the Presidential Medal of Freedom in 2005 for his leadership in geography education.

Like the author who, according to some biographies, “grew up Geographic,” the familiar yellow rectangle that represents the National Geographic magazine has been part of my entire life. Once, I was even on a plane to La Paz, BCS, Mexico when I realized most of the men on the plane were wearing black baseball caps with that logo. It took me a moment to realize they were all photographers on their way to meet the National Geographic Society’s boat for a photography excursion. My point in relating this is that reading about one of the men “behind the scenes” of one of my favorite institutions was a natural choice for me. I love biographies. I grew up on National Geographic magazine and the TV specials and I even had a subscription to National Geographic World, which was designed for kids, when I was ten. When something is imprinted with that yellow rectangle, you know you can trust it.

Gilbert M. Grosvenor is more than just a former president of the National Geographic Society. He’s a traveler, an explorer, a photographer, and educator, and a storyteller in the grandest sense of the word. In this book, with the help of the Society’s archivist Mark Jenkins, he tells his own story – how National Geographic literally runs in his veins, as his grandfather was a founding member and his father ran things before him. (He shares that he’s also a descendant of Alexander Graham Bell, but that’s really just a factoid thrown in to give context to his family history.)

Having read the book and listened to the audiobook, I feel like I’ve been steeped in Mr. Grosvenor’s story, but that’s not a bad thing. This book is well-paced and has a nice balance of adventures in the world (spending part of his army service as a photographer) and behind a desk (he was instrumental in creating that kids’ magazine, meant to be child-friendly without dumbing things down) . He shares anecdotes about meeting Jane Goodall and Robert Peary, but also  tells how they managed to get inside photos of the Apollo missions even though Life Magazine had an exclusive contract with the astronauts. His writerly voice is full of wonder when he talks about Robert Ballard’s discovery of the sunken Titanic, and full of poignance when he discusses Koko the Gorilla and her use of language. While this book is very much the story of the magazine as we know it today, it’s equally the story of the man, Gilbert M. Grovesnor, who was instrumental in making it into the entity we all know and love.

Reading A Man of the World is like having the author sitting in your living room regaling you with tales of his adventures and experiences, and while it was a satisfying read, I felt myself wanting more, just because I enjoyed it so much.

Goes well with: a juicy streak, a baked potato, a simple salad, and a glass or two of Shiraz.