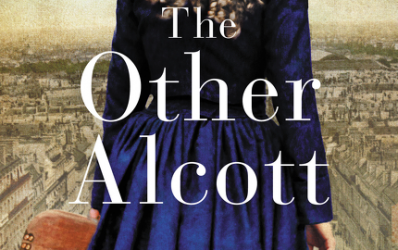 About the book, The Other Alcott Named one of POPSUGAR’s 25 Books to Read This Fall!

Elise Hooper’s debut novel conjures the fascinating, untold story of May Alcott—Louisa’s youngest sister and an artist in her own right.

We all know the story of the March sisters, heroines of Louisa May Alcott’s Little Women. But while everyone cheers on Jo March, based on Louisa herself, Amy March is often the least favorite sister. Now, it’s time to learn the truth about the real “Amy”, Louisa’s sister, May.

Stylish, outgoing, creative, May Alcott grows up longing to experience the wide world beyond Concord, Massachusetts. While her sister Louisa crafts stories, May herself is a talented and dedicated artist, taking lessons in Boston, turning down a marriage proposal from a well-off suitor, and facing scorn for entering what is very much a man’s profession.

Life for the Alcott family has never been easy, so when Louisa’s Little Women is published, its success eases the financial burdens they’d faced for so many years. Everyone agrees the novel is charming, but May is struck to the core by the portrayal of selfish, spoiled “Amy March.” Is this what her beloved sister really thinks of her?

So May embarks on a quest to discover her own true identity, as an artist and a woman. From Boston to Rome, London, and Paris, this brave, talented, and determined woman forges an amazing life of her own, making her so much more than merely “The Other Alcott.”

Praise for The Other Alcott:

“Elise Hooper’s thoroughly modern debut gives a fresh take on one of literature’s most beloved families. To read this book is to understand why the women behind Little Women continue to cast a long shadow on our imaginations and dreams. Hooper is a writer to watch!”—Elisabeth Egan, author of A Window Opens

Buy, read, and discuss The Other Alcott:

About the author, Elise Hooper

Though a New Englander by birth (and at heart), Elise Hooper lives with her husband and two young daughters in Seattle, where she teaches history and literature.

When I was six or seven, my mother and I started reading Little Women, a chapter a night, as we had every book until then. It was the last book we read that way, because my reading ability had finally progressed enough that the tiny print and paper-thin pages (it was all three of the March sisters’ novels in one volume) posed no challenge to me, and a chapter a night was no longer enough.

Like most fans of those books, I wanted to be Jo March. There are times when I still want to be Jo. But I never disliked Amy, and when I was given the chance to read The Other Alcott, a novelization of May Alcott’s (the model for Amy) life, I jumped at it. There might even have been begging involved.

Author Elise Hooper has taken a massive amount of research and turned it into an engaging novel that gives us a glimpse at the youngest Alcott sister. As well, she shows how May and her fictional counterpart are similar, and how they are different.

While some of the connections May makes in this novel are merely supposition; others are true to life. Mary Cassatt, whose art I’ve loved ever since I learned what Impressionism was, was both a contemporary and a friend. May spent a lot of time in Europe, making the French countryside her home – and I find myself a bit envious.

Part biography, part love story (May has a  great love come into her life when he’s in her mid-thirties – old for the time) and entirely engaging, The Other Alcott exists in that area between pure fact and total fiction. It’s truthful even when the author has extrapolated information (or even just made stuff up) and it feels like a much-needed addition to the library of any Louisa May Alcott fan.

TBD: Into the Hall of Books