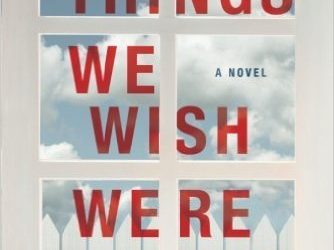 About the book The Things We Wish Were True In an idyllic small-town neighborhood, a near tragedy triggers a series of dark revelations.

From the outside, Sycamore Glen, North Carolina, might look like the perfect all-American neighborhood. But behind the white picket fences lies a web of secrets that reach from house to house.

Up and down the streets, neighbors quietly bear the weight of their own pasts—until an accident at the community pool upsets the delicate equilibrium. And when tragic circumstances compel a woman to return to Sycamore Glen after years of self-imposed banishment, the tangle of the neighbors’ intertwined lives begins to unravel.

During the course of a sweltering summer, long-buried secrets are revealed, and the neighbors learn that it’s impossible to really know those closest to us. But is it impossible to love and forgive them?

Buy, read, and discuss The Things We Wish Were True

About the author, Marybeth Mayhew Whalen Marybeth Mayhew Whalen is the author of five previous novels and speaks to women’s groups around the United States. She is the cofounder of the popular women’s fiction site She Reads and is active in a local writers’ group. Marybeth and her husband, Curt, have been married for twenty-four years and are the parents of six children, ranging from young adult to elementary age. The family lives in North Carolina. Marybeth spends most of her time in the grocery store but occasionally escapes long enough to scribble some words. She is always at work on her next novel.

I always enjoy novels that involve many characters, or groups of characters, each with individual arcs but intersecting plots. Maeve Binchy was a master of such stories. This is the first of Marybeth Mayhew Whalen’s that I’ve encountered, but if it’s anything to judge by, she’s also masterful when it comes to interweaving separate stories.

And this novel is very much a collection of separate-but-intertwined stories. Two children whose mother works like crazy, but never seems to have enough, a wife who cannot seem to function any more, pairs of adults and children who don’t always connect – it’s a microcosm of American suburbia, drawn with just enough darkness at the edges to keep the sweet moments from being saccharine.

This typical suburban life was never my reality, and I’m wondering if the sense that I was looking through a slightly distorted lens, a warped window or clouded mirror was because of my own disconnect from such neighborhoods – everyone I knew growing up went to beaches or had their own pool, so a community pool was never part of my experience – or intentional on the author’s part, but the feeling worked for the story, making the people of Sycamore Glen feel like folks you don’t really know, but have maybe seen at the grocery store and so have a passing familiarity with. It’s similar to the sense of an endless summer, but a little more heightened.

Whalen’s characters all felt dimensional. I don’t have a favorite… they were all so well-drawn, that to pick one out seems impossible. Jencey, I think, the mother on the run from a bad relationship, her two kids in tow, really stood out for me, as did Bryte, but Cailey, the bright, determined little girl half of the sister-and-brother team in the rental house really shone. I’d love a folllow-up novel tracking her as an adult. She had grit and spunk, and those things appeal to me.

Overall, this is a perfect summer read, but it’s not a novel that would be out of place at any time of year. It is well crafted, with excellent characters, a connective plot that is quietly compelling, and a theme of resilience, neighborliness, and hope.

Tuesday, September 13th: I’d Rather Be at the Beach

Thursday, September 15th: Thoughts on This ‘n That

Friday, September 30th: Not in Jersey