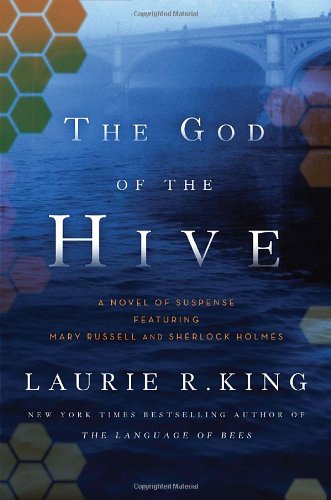 The God of the Hive
Laurie R. King
Bantam, 368 pages
Get it from Amazon >>

I’ve been a fan of Laurie R. King’s series about Mary Russell and her older husband, the legendary Sherlock Holmes, since the first book hit the stores, so of course, I had to have the latest adventure the very second it came out. When The God of the Hive arrived, however, I put it aside, planning to savor it while on vacation. Instead, I read all the paperbacks I’d brought with me, so that I could leave them for my mother, and didn’t read this novel until I got home.

One of the things I love about this series is the level of detail King includes. While she doesn’t have to know what passed for the best acne treatment in Holmesian London, she does have to know where one can find certain kinds of stationery, or where a bolthole might be located.

In this book, which is a direct sequel to the previous installment, The Language of Bees, Russell and Holmes are still separated by the requirements of their current case – Holmes fleeing with his injured long-lost son, and meets up with a Scottish doctor, who ends up being a fabulous addition to the existing cast of characters. Mary, on the other hand, has the aeroplane pilot, and Holmes’ half-Chinese granddaughter to contend with, though she, too, hooks up with a helper who turns out to be quite beneficial to all concerned.

There isn’t much detection in this novel – there is character and there’s plot, but it’s basically a chase scene interrupted by action.

The good news, however, is that it’s still, undeniably King’s work, which is always incredibly compelling reading.