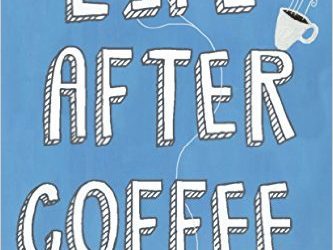 About the book Life After Coffee When globe-trotting coffee buyer, Amy O’Hara, assures her husband—who stays at home to watch the kids—that it is He Who Has it Harder… she doesn’t really believe it. That is, until the day she gets laid off, her husband decides to devote all his waking hours to writing a screenplay, and she discovers she’s actually the world’s most incompetent mother.

Amy’s only possible salvation is to find another high-flying job as quickly as possible, but with the coffee industry imploding around her—and the competing buyers in her field being much hipper prospects—things look pretty dire. Even if Amy does manage to find full-time employment ever again, as her life slowly becomes more and more entwined with her children’s, how will she be able to bear leaving them to travel for weeks on end?

When salvation appears in the form of a movie-mogul ex-boyfriend who wants to employ her husband and rekindle their relationship, Amy starts to find she’s sorely tempted…

About the author, Virginia Franken Virginia Franken was born and raised in Medway, Kent, the place where Henry the 8th sent his wives on holiday in the hope that they’d be eaten alive by mosquitoes and save him the trouble of beheading them. Most her childhood was spent wearing a dance leotard and tights, and at age 11 she attended the (sort of) prestigious dance school The Arts Education School, Tring, where she spent her teen years trying to do pique turns in a straight line and getting drunk in the village. (The inability to do the former possibly informed by too much opportunity to do the latter).

After graduating from The University of Roehampton, she worked on cruise liners as a professional dancer before deciding she’d had enough of wearing diamanté g-strings for a living and somehow managed to bag a job in book publishing.  Getting fed up of having to choose between paying the rent or buying groceries, she eventually moved from London to Los Angeles where life was affordable and every time she opened her mouth she got to act all surprised and flattered when someone said they liked her accent. She then spent years trying to convince everyone else that it was them who had the accent, but this was never met with anything more emphatic than a polite, “Is that so…”

These days she lives in Monrovia, near to Pasadena, with two kids, a dog, one ever-lasting goldfish and her bearded lover, in a house that’s just a little bit too small to fit everyone in quite comfortably. She gets most of her writing done when she should be sleeping. LIFE AFTER COFFEE is her first novel. If enough people buy a copy, there’s a good chance she’ll write another…

I fell in love with this book just from the title, and that initial crush was fully realized before I was three chapters into this funny, fast paced, breezy read about a woman who has to learn the hard way how to balance her career, marriage, and motherhood, a task made more urgent when she’s fired from her globetrotting coffee-buying job and suddenly has to be the primary caregiver to her two children.

Amy, the main character is engaging and likeable, even if there are moments when you want to grab her and shake her. Patrick, her writer husband wavers between being a true helpmate and being a ball of depression. The two kids are sticky, adorable, and somewhat troublesome, and felt just real enough that I could feel bad for them, and laugh at them, without feeling guilty.

First-time novelist Virginia Franken deftly manages her characters. While some of their choices make you want to shake the until they can’t see straight, those low-percentage decisions only serve to make Amy, Patrick, and the people they encounter feel more real, especially next-door neighbor Lizzie who starts out as an antagonist of sorts, and morphs into an ally, if not a friend, by the end of the story.

I really appreciate Franken’s use of first-person in Life After Coffee, and commend her on Amy’s dialogue in particular. At times, I had to remind myself that this was a novel and not a super-candid memoir.

If you want a novel that is both fantastically funny and a fast read, Life After Coffee would be an excellent choice.

Goes well with coffee, obviously, and a toasted English muffin with the nut-butter of your choice. I like cashew. One lucky reader in the U.S. or Canada will get a copy of Life After Coffee mailed to them by the publicist. How? you ask. I’ll tell you:

Monday, October 17th: All Roads Lead to the Kitchen