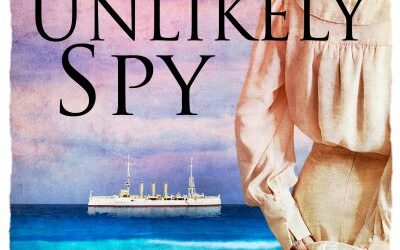 About the book, The Unlikely Spy Casablanca meets Notorious in a Hitchcock-style thriller of espionage, romance, adventure, and intrigue.

1917. Emma Christensen is a young widow who returns to the Danish West Indies to reclaim the life and the villa she left behind. When she discovers her husband has disinherited her in favor of his young heir—an illegitimate son—she turns to the one thing she knows, gambling, and soon finds herself deeply in debt.

Emma is approached by Cornelius Smith, a representative of an American shipping line, who offers an alternative: infiltrate the suspicious Hamburg-American Line and spy on its nefarious leader, Julius Luckner, to gain valuable business intelligence for his firm.

It doesn’t take long for Emma to realize that both Smith and Luckner are not as they seem. Close to the Allies but even closer to the enemy, Emma bravely engages in missions that could blow her cover at any moment. But with the Panama Canal at stake, how far will she go to help the Allies?

A gripping and suspenseful World War I spy thriller from an accomplished thriller and historical adventure writer.

About the author, Sophie Schiller

Sophie Schiller is an author of historical fiction and spy thrillers. She loves stories that carry the reader back in time to exotic and far-flung locations. Kirkus Reviews has called her “an accomplished thriller and historical adventure writer.” Publishers Weekly called her novel, ISLAND ON FIRE, “a memorable romantic thriller”, her novel RACE TO TIBET, “a thrilling yarn,” and her TRANSFER DAY, “a page-turner with emotional resonance.” Kirkus Reviews called her latest novel, THE LOST DIARY OF ALEXANDER HAMILTON, “an engaging coming-of-age story of heartbreak, bravery, honor, and triumph.” Her latest novel is THE UNLIKELY SPY, a historical spy thriller set during WWI. She graduated from American University, Washington, DC and lives in Brooklyn, NY.

I love it when we get to see history from the point of view of underrepresented segments of the population, so this novel, The Unlikely Spy, with it’s vividly written lead character, Emma Christensen, Danish, disinherited, and deeply in debt, was right up my alley. I also enjoyed the World War I setting, which tends to be overlooked in favor of World War II stories.  (Incidentally, my grandfather was stationed in Panama during that later war, so a story involving earlier days of the canal was of special interest to me.)

I liked Emma. I liked that she didn’t whine overmuch about her change in circumstances, but took an opportunity when one was offered. I also liked that she was smart enough to realize that neither her boss (Smith) nor his competitor (Luckner) were true to the way they presented themselves in public, and it was her choices that kept me riveted throughout this well plotted story.

The blurb for this book references both Casablanca and Notorious, and those are apt comparisons both in tone and in the cinematic descriptions in this novel. I could easily see it as a PBS mega-production, or even a Merchant-Ivory film (are they even still around???). The story leaps off the page and embeds itself into your imagination, and is never disappointing.

Attention must also be paid to the amazing amount of research author Sophie Schiller obviously did on early twentieth-century shipping company and practices. The level of detail she incorporated gave this story another layer of versimilitude, and I appreciated it immensely.

Bottom line: This is an engaging, well-paced story with a strong female lead.

Goes well with: steamed mussels and a crisp white wine.

Visit the other Great Blogs on this tour

Tuesday, September 27
Review at Dive Into a Good Book

Friday, September 30
Excerpt at Passages to the Past

Tuesday, October 4
Review at Reading is My Remedy