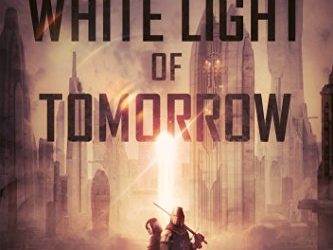 About the book, The White Light of Tomorrow In a future dominated by the Church and defended by the sword, one piece of forbidden technology may change all the rules.

Adrian of Tarsus is a veteran Knight Hospitaler. His adopted daughter, Mariel, serves as his squire, and together they travel the galaxy aboard the ancient merchant ship Miranda. Adrian uses his position as a Church enforcer to provide cover for his real quest: a cure for Mariel’s mysterious and painful illness, which worsens every day.

Trouble is, Adrian’s certain the cure requires Machina Infernus, heretical technology forbidden by the Church, and not even a Knight can hide from the Holy Office of the Universal Inquisition.

When the Miranda’s crew are ambushed while acquiring such an object, Adrian turns to Sabine Adler, an old flame and specialist in Machina, for help.

But once on the planet Bethany, Sabine’s home and the seat of Christendom, assassins come out of the woodwork and everyone seems to want Adrian’s relic –mercenaries, cultists, thugs, politicians, even the Inquisition. Most troubling of all are a pair of unusual nuns who claim to know the location of the lab where the relic originated, and the fact that one of them bears a striking resemblance to Mariel.

Adrian has survived galactic crusades, skilled assassins, and Church politics, but these women may be the death of him.

Buy, read, and discuss The White Light of Tomorrow

About the author, D. Pierce Williams I am a computer geek, history nut, aviation enthusiast, and very efficient procrastinator. I play tabletop role-playing games (Dungeons & Dragons, Shadowrun, White Wolf, etc.) like it’s 1989. I like to listen to Bach, Van Halen, and Snoop Dogg in that order. I loves dogs. All of them.

I entered a History Master’s program in the fall of ’97. For reasons having everything to do with money, I left the program and instead completed an MBA focusing on information technology management. I graduated from this program in 2000. From 1999 onward I’ve pursued a successful career in IT, and worked as a network and systems engineer for a Fortune 100 life-insurance and retirement services company for the past ten years.

Since 2013 I’ve been working hard on this, THE WHITE LIGHT OF TOMORROW, my first novel, which draws on my interest in science fiction and my love of history and technology.

“I’m reading this great book,” I told my husband. “It’s got elements of history, science fiction, and high fantasy.”

“Oh, really?” he asked, his entire face lighting up with interest. “It sounds like something I might enjoy.”

And so even before this review goes live, I’ve put this novel, The White Light of Tomorrow into another reader’s hands. Go, me!

The tone is best described as Firefly meets the Renaissance, but that’s an over-simplification, because the author, a self-described history nut, has clearly done a lot of research to make the world of this book feel, not just vivid and dimensional, but wholly original. When Sabine was complaining about her shoes, in the first scene where we meet her, I was so into the story that my feet hurt in sympathy. I could hear the noise of her pub, and, in street scenes, I could feel dirt roads beneath my feet. At the same time, when I realized the ship that Adrian and Mariel call home was a space-going vessel, I was pleasantly surprised (this despite having read the description and the marketing materials for the book).

I really liked the mix of historic society – swords and cloaks and taverns – with bits of technology – space ships and DNA drives, and I found that the author meshed these seemingly disparate cultures into a cohesive one very believably. I also appreciated the diversity of his characters. Not only were women well represented, but not every major character was a middle-class white guy. Instead, there was a realistic and plausible blend of people from all levels of education, wealth, and nationality. This is something that contemporary speculative fiction often has trouble with, and there’s a line between having believable diversity and making the cast of characters feel like a Very Special Episode of some drama.

I don’t generally tell people who my favorite characters are, but something about Mariel, who is roughly fourteen when we meet her, really resonated with me. I think it was the combination of her spunk, and the way she essentially created her own family.

As aspiring writers, we are often admonished to ‘write what you know,’ which is difficult when you’re writing a piece that doesn’t take place on contemporary (or near-contemporary) Earth. With The White Light of Tomorrow, it’s clear that author Williams has taken all the things he knows and loves – history, science fiction, aviation – and woven them together into a story that tickles the imagination and makes you beg for more.

It’s implied that this book is meant to be the first of a series; I eagerly await the subsequent volumes.

Goes well with pub food: fish and chips or shepherd’s pie and a pint of ale. 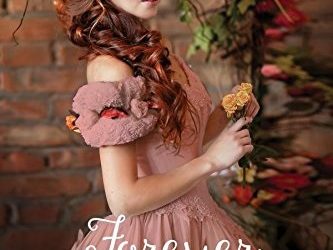 About the book, Forever Rose

Alessandro Santini, an Italian doctor from the twenty-first century, lives an ordinary life in modern day Florence. But one evening, he passes through a swirling vortex caused by a supermoon and discovers he has stepped three hundred years into the past. Countess Rose Estes is torn between following her dream of becoming a historical painter and her duty toward her family. After Rose’s father is wounded during her birthday ball, Alex and Rose burn with questions: Who attacked him with a flying dagger? Why? Forced to go to Siena and spend fourteen months together, Rose and Alex find themselves drawn to each other as they search for answers and discover secrets that go deeper than they ever imagined. As the portal’s opening approaches, Alex finds out that Rose has been poisoned through the roses she’s been receiving. He has two choices to save her life—take Rose to his time or go by himself and bring the medication she needs.

About the author, Carmen Monica Oprea

Born in Vaslui, Romania, and educated in both Romania and America, Carmen has been in the US since 2001. She’s smart, gorgeous, kind, and her accent is utterly charming (Romanian with a hint of Nashville, where she now lives). Her debut novel combines time travel and romance with an intriguing historical mystery.

Every so often a book comes your way that defies categorization. That’s the case with Forever Rose, which is both a contemporary story in an historical setting, and an historical romance with contemporary bookends. As well, it’s also a fantasy with a touch of magical realism, and there’s an element of mystery to round things out.

But a book is not merely its category, and Forever Rose transcends all of the possible boxes it could fit into, and is, ultimately, a wonderfully romantic, sometimes funny – sometimes poignant, strangely compelling story that takes you from the contemporary world of medicine and laser technology to eighteenth-century Florence, and makes you look up at the full moon and wonder what magic it might bring to your life.

Author Carmen Monica Oprea writes her period characters with an ease that I wish more writers would find. They never sound out of place, or out of time, but neither is their language stilted or inaccessible. Her lead character, Rose, is both wise and witty, despite being just twenty (though, obviously twenty in the 1700s is much different than twenty today), an accomplished painter, and a surprisingly enlightened young woman. Her sister is more ‘typical’  – overly entitled and somewhat annoying – and her parents feel period appropriate, but are also fully realized characters, and not just cardboard cutouts.

Similarly, Alessandro Santini – Alex – the young doctor who steps back in time during a full moon – is perfectly plausible as a doctor who has known tragedy and is too alone in our world that is so bright and antiseptic. I really liked him, and I was willing to follow him on his journey.

At 303 pages in the paperback version, this novel is just long enough to be really satisfying, but short enough that, if you’re me, you can read it on a single, stormy afternoon. While I figured out the ‘mystery’ part of the story relatively quickly, knowing the truth of ‘whodunnit’ did not spoil my enjoyment of the novel at all.

If you are in the mood for a romance that is a bit meatier and includes a bit more of a speculative bent than most such stories, or if you just want to read about the lengths people will go when they find the person who is right for them, you will love this book, Forever Rose.

Goes well with a glass of homemade limoncello, sipped slowly in the moonlight with the love of your life.