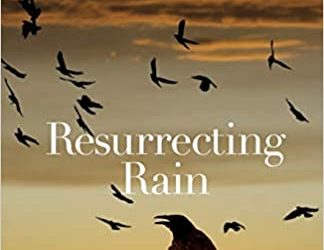 About the book, Resurrecting Rain Deena’s house is being auctioned off at sheriff’s sale and her marriage is falling apart. As her carefully constructed life unravels, her thoughts return to the New Moon Commune outside Santa Fe where she was born, and to Rain, the lesbian mother she had abandoned at fourteen. No one, not even her husband and children, know about New Moon or that she sat Shiva for Rain in exchange for living in her Orthodox grandmother’s house in an upscale suburb of Cleveland.

Deena’s story unfolds with empathy and wit as a cascade of disasters leaves this middle aged librarian unmoored from her home and family, penniless and alone on the streets of Sarasota, Florida. The novel is populated with deftly drawn characters full of their own secrets and surprises–from Deena’s blue haired freegan daughter who refuses to tell her parents where she lives, to the octogenarian TV writer who believes that crows are the reincarnated souls of Jews lost in the Holocaust. Deena loses her house, but will she find a home? Maybe the crows know.

Resurrecting Rain explores the unanticipated consequences of the choices that we make, the bonds and boundaries of love and the cost of our infatuation with materialism. At its heart the novel is a tale of loss and redemption, a reevaluation of our material culture and an appreciation for the blessing of friends and family. It demonstrates that sometimes you have to lose everything before you find yourself.

“Averbach unspools her story with dark humor and a mounting sense of calamity. Her prose is measured yet vigorous, capturing the chagrin Deena feels with each new humiliation…Averbach approaches Deena’s problems with restraint and seriousness and has things to say about materialism and self-exploration… an organic and quite captivating plot. A finely drawn story of a woman losing everything and finding herself.”
-Kirkus Review

“A deftly crafted novel by an author with an engaging narrative storytelling style — extraordinary and unique-— highly recommended, especially for contemporary literary fiction collections. “Resurrecting Rain” is one of those novels that linger in the mind of the reader long after the book itself has been set back upon the shelf.”
-MidwestBook Review

About the author, Patricia Averbach Patricia Averbach, a Cleveland native, is the former director of the Chautauqua Writers’ Center in Chautauqua, New York.

Averbach’s second novel, Resurrecting Rain, the contemporary story of a woman who loses her house but finds her home, was released by Golden Antelope Press in 2020.

Her first novel, Painting Bridges, was described in a Cleveland Plain Dealer review as “introspective, intelligent and moving.” Her poetry chapbook, Missing Persons, received the London based Lumen/Camden award in 2013 and was selected by the Times of London Literary Supplement (Nov. 2014) as one of the best short collections of the year.

Previous work includes a memoir about her early career as Anzia Yezierska’s sixteen year old literary assistant and an article about the Jewish community in a virtual world called, Second Life. Her work has appeared in Lilith Magazine, Margie, The Muse, and The Blue Angel Review.

As much as I enjoy all fiction, I always find it really refreshing when the protagonist of a story is a mature adult. Not old, just not twenty. Patricia Averbach’s novel Resurrecting Rain is the perfect example of such a novel, because when we initially meet Deena she’s a librarian with a failing marriage, among other catastrophic life events.

What I loved about this story was the way Averbach wove together Deena’s past and present. The novel never felt like it was overwhelming you with exposition, but rather, the backstory was offered in context, so we got to see our main character fully formed, and in the process of forming.

I also appreciated the way Averbach wrote dialogue. From Deena’s grandmother to her mother to herself, each character had a distinct voice and tone, and yet, the sense that they were all connected by family ties was also evident in the characterization, the descriptions, and even some of the speech patterns. This attention to detail is what made Resurrecting Rain really sing for me.

Overall, this novel is proof that one can have a coming-of-age experience at any point in their life. Deena, when we meet her, is a character in flux, but as her story progresses she becomes more and more herself, owning her past and, building on it. This not only made for a satisfying read, but it also made her feel more real.

Averbach is definitely a writer whose work I’ll be reading more of, and Resurrecting Rain is a novel I’m recommending to every woman I know.

Goes well with: coffee and an onion bagel with cream cheese and lox. Capers and tomato optional.

Thursday, May 7th: Thoughts on This ‘n That