Over the last week or so, I’ve been living on the prairie. Not the North Texas prairie that is still crusty with drought, despite recent and forthcoming rain, though of course, technically our city IS on the prairie, but the prairie as brought to life by Laura Ingalls Wilder and two of her modern fans.

I grew up reading the Little House… books, and re-read them when I moved to South Dakota to marry Fuzzy in 1995. They have new dimension when your husband is from a town just half an hour from the real Little Town on the Prairie, and your new niece and nephews attend Laura Wilder Elementary School!

I read The Long Winter last winter (and early Spring) after we returned home from a trip to Iowa in early February (for a family funeral) and after I found the amazing blog/website Beyond Little House. The members of that site were in the middle of a read-along of that book, and I wanted to participate, but was so busy…and then life exploded in other ways.

During the intervening years, I’ve visited a few of the home sites (De Smet, many times, Plum Creek, Walnut Grove, keep meaning to visit Independence, but never have), read a good portion of the published literature about Mrs. A. J. Wilder, and considered a Laura project of my own.

That consideration has been sparked, recently, by two new(ish) Laura-related books by fans who are roughly my age.

The first I encountered is a humorous memoir by Wendy McClure. It’s called The Wilder Life: My Adventures in the Lost World of Little House on the Prairie, and it’s about the author’s journeys to the various homesites, and her attempts to bring a bit of “Laura World,” as she calls it, into her own world. (It’s at this point that I must confess: My mother used to make sunbonnets for me, I dressed as Laura for Halloween, 1977, and I have boiled syrup to pour over snow, but I have never considered buying a churn and making my own butter.)

McClure’s book resonated with me for another reason – her partner’s name (at least, the one in the book) is the same as Fuzzy’s real name.

Unlike McClure, however, I loved the television show. Oh, I knew it wasn’t accurate, but just as I’ve often said of the Harry Potter movies, that show was what might have resulted had the real Laura sold her story to the media herself. Also? It was fun to watch. My friend Jill would come over on Monday nights and we’d do our homework while waiting to see if Laura and Almanzo would finally kiss.

I was, however, a fan of the books first, and there were times in Colorado when there were three feet of snow on the ground and school was closed for days because the buses couldn’t get over the pass that I had the barest glimpse of what that Long Winter might have been like. (After my first real winter in South Dakota, I realized that Colorado winters were mild by comparison. I also realized that as much as I might like to imagine living on the prairie in a claim shanty, I’m a modern woman, and I am DONE with serious winter.)

I devoured McClure’s book and wanted more. Coincidentally, I was led to my other Laura-book of this week, another memoir, by a woman just two years older than I am. Her name is Kelly Kathleen Ferguson, and her book – which I read in one day, and finished while soaking in a tub of lavender-scented bubbles – is My Life as Laura: How I Searched for Laura Ingalls Wilder and Found Myself.

Ferguson is a bit wilder than McClure, in that – on a mission of self discovery – she donned a prairie dress, and wore it on a two week marathon visit to all of the midwestern homesites of the Ingalls and Wilder clans. Her book is also funny, candid, and, at times, poignant, and as I read it I almost – ALMOST – wanted to be single again, so I could just uproot myself and move to another city and write.

Her description of her time at Prairie Manor, specifically, made me want to go back to Dakota and spend the night there, even though I HATE the prairie in summer. I was even ThisClose to calling Fuzzy’s family and asking if we could drive up and crash their Thanksgiving, just so we could drive a few miles on the Laura Ingalls Wilder Memorial Highway during the trip.

But that’s the beauty of books – they allow you to live vicariously through another person, and then, put them down having learned something about yourself as well as something about the author.

I enjoyed both of the books I read this week, and have arranged to interview Ms. Ferguson for All Things Girl. I’ve also started a fresh re-reading of all the Little House books, because even if I don’t do anything with it, I have to write the Laura-related story that has been perking in my brain for the last 16 years.

And if I’m sort of wishing I could have a Christmas party where we all get a tin cup, a penny, and a stick of candy, in a room decorated by paper chains and popcorn strings, well, I know of at least two women who probably have the same kind-of wish. 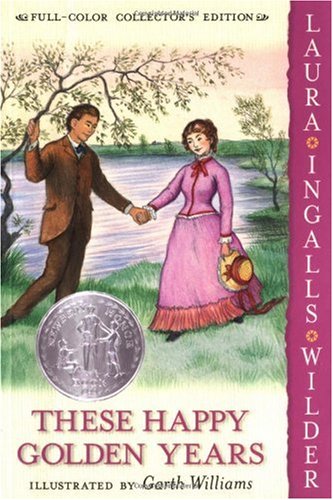