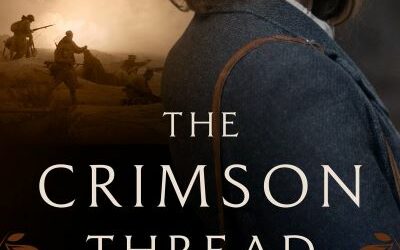 About the book, The Crimson Thread In Crete during World War II, Alenka, a young woman who fights with the resistance against the brutal Nazi occupation, finds herself caught between her traitor of a brother and the man she loves, an undercover agent working for the Allies.

May 1941. German paratroopers launch a blitzkrieg from the air against Crete. They are met with fierce defiance, the Greeks fighting back with daggers, pitchforks, and kitchen knives. During the bloody eleven-day battle, Alenka, a young Greek woman, saves the lives of two Australian soldiers.

Jack and Teddy are childhood friends who joined up together to see the world. Both men fall in love with Alenka. They are forced to retreat with the tattered remains of the Allied forces over the towering White Mountains. Both are among the seven thousand Allied soldiers left behind in the desperate evacuation from Crete’s storm-lashed southern coast. Alenka hides Jack and Teddy at great risk to herself. Her brother Axel is a Nazi sympathiser and collaborator and spies on her movements.

As Crete suffers under the Nazi jackboot, Alenka is drawn into an intense triangle of conflicting emotions with Jack and Teddy. Their friendship suffers under the strain of months of hiding and their rivalry for her love. Together, they join the resistance and fight to free the island, but all three will find themselves tested to their limits. Alenka must choose whom to trust and whom to love and, in the end, whom to save.

About the author, Kate Forsyth Kate Forsyth wrote her first novel at the age of seven, and is now the internationally bestselling author of 40 books for both adults and children.

Her books for adults include ‘Beauty in Thorns’, the true love story behind a famous painting of ‘Sleeping Beauty’; ‘The Beast’s Garden’, a retelling of the Grimm version of ‘Beauty & the Beast’, set in the German underground resistance to Hitler in WWII; ‘The Wild Girl’, the love story of Wilhelm Grimm and Dortchen Wild, the young woman who told him many of the world’s most famous fairy tales; ‘Bitter Greens’, a retelling of the Rapunzel fairytale; and the bestselling fantasy series ‘Witches of Eileanan’ Her books for children include ‘The Impossible Quest’, ‘The Gypsy Crown’, ‘The Puzzle Ring’, and ‘The Starkin Crown’

Kate has a doctorate in fairytale studies, a Masters of Creative Writing, a Bachelor of Arts in Literature, and is an accredited master storyteller.

I received this book just as I was moving into a new house, read it in between unpacking boxes, and then listened to the audio book version to refresh myself since it had been so many weeks. Both in print and in audio, The Crimson Thread is a compelling story, well crafted and well paced.

There’s something especially intriguing about World War II  stories, I think. On the one hand, even if the brutality of war is not in the foreground, it is ever present. On the other, perhaps because we know who wins, there’s an element of romance to them is rarely associated with other periods. This novel is the perfect example of this. Two of the lead characters are soldiers, one eventually joins the Resistance, and while the reality of war, of the German army invading the Greek islands, is the impetus for the story, the love triangle between Jack, Teddy, and Alenka is as gripping as any of the battle strategy or espionage that is also in this book.

To be fair, I was team Jack from the start. Teddy is the playboy while Jack is the steadfast soldier, and I doubt that they would have become friends – or friendly – under normal circumstances. Author Forsyth wrote both men equally vividly, but where Teddy is brash, Jack is thoughtful, and creative. As a an amateur cellist, I loved that the cello was part of his story, but I also loved the concept of poem codes – something I’ve never encountered before in my reading. (I want to know more about this!)

Alenka is also a dynamic character, soft at times, but also resolute, and even fierce. I could see how either man would fall for her – I almost fell for her myself. Her strained relationship with her Nazi-sympathizer younger brother – a mere child when we first meet him – added depth to her character and his.

The audio book, I felt, really captured the tone of each of these three leads, and I loved that there was a female narrator for the chapters that were primarily Alenka’s point of view. But even the print version made each of them feel like real, living beings.

Author Kate Forsyth had a deft hand when crafting this novel. The pacing was perfect. The dates at the beginning of each section, and the shifting perspectives made the story more intense, especially in the last third when the jeopardy to all the characters increased. Her use of dialogue is also excellent – I never felt like these people were out of time or out of place.

If you want a riveting romantic drama set against a part of World War II that is less familiar than the typical England or France, The Crimson Thread is for you.

Goes well with: charbroiled squid and a cold beer.

Enter to win a copy of The Crimson Thread by Kate Forsyth! We have 10 copies up for grabs!

The giveaway is open to the US only and ends on July 29th. You must be 18 or older to enter. Friday, July 1
Review at Books In Their Natural Habitat

Friday, July 8
Review at Dive Into a Good Book

Monday, July 18
Review at History from a Woman’s Perspective

Tuesday, July 19
Interview at History from a Woman’s Perspective

Wednesday, July 20
Review at Passages to the Past

Saturday, July 23
Review at Reading is My Remedy

Tuesday, July 26
Review at With a Book in Our Hands

Wednesday, July 27
Excerpt at What Is That Book About

Friday, July 29
Review at Reading the Past