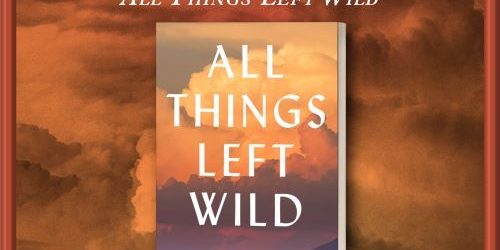 About the book, All Things Left Wild After an attempted horse theft goes tragically wrong, sixteen-year-old Caleb Bentley is on the run with his mean-spirited older brother across the American Southwest at the turn of the twentieth century. Caleb’s moral compass and inner courage will be tested as they travel the harsh terrain and encounter those who have carved out a life there, for good or ill.

Wealthy and bookish Randall Dawson, out of place in this rugged and violent country, is begrudgingly chasing after the Bentley brothers. With little sense of how to survive, much less how to take his revenge, Randall meets Charlotte, a woman experienced in the deadly ways of life in the West. Together they navigate the murky values of vigilante justice.

Powerful and atmospheric, lyrical and fast-paced, All Things Left Wild is a coming-of-age for one man, a midlife odyssey for the other, and an illustration of the violence and corruption prevalent in our fast-expanding country. It artfully sketches the magnificence of the American West as mirrored in the human soul.

James Wade lives and writes in Austin, Texas, with his wife and daughter. He has had twenty short stories published in various literary magazines and journals. He is the winner of the Writers’ League of Texas Manuscript Contest and a finalist of the Tethered by Letters Short Fiction Contest. All Things Left Wild is his debut novel

My first reaction to James Wade’s novel All Things Left Wild was that the writing was both vivid and incredibly lyrical. I could have easily read three hundred pages of James Wade just describing the scenery and been completely satisfied. But this is not a nature guide, it’s a novel, and the story was as powerful as the opening scene-setting was beautiful.

What I liked was the way Wade depicted the pain that Caleb clearly felt. Whether riding a stolen horse through the dry Texas landscape or sharing his theory about why people really wear black at funerals, Caleb’s words express unwritten pain and unspoken longing, though it’s not always explicit what he’s longing for. Conversely, Shelby is much more what-you-see-is-what-you-get. Sure, he’s the older brother and guiding force, but he’s just as broken as his younger sibling, though he expresses it differently. Wade’s craft really shows in both the similarities and contrasts of the Bentley Brothers.

As to the villain of the story, Dawson could easily have been a cardboard figure, only existing to provide the boys with an impetus to run, but in Wade’s care he becomes equally vibrant and dimensional as the boys. His story, of course, is more mid-life crisis than coming-of-age, but it’s still a story of the way environment and experience change us, no matter how old we are, or what our lot in life might be.

Overall, this is a story that has several gritty elements but is elevated to literary fiction by the quality of the writing and the well-paced plot. Wade never lets us get bored, and while he may linger in a scene  from time to time, letting us watch a hawk take flight, or feel the hot and dusty wind, that propensity for description only makes the novel seem more real.

Goes well with: steak cooked over an open fire, and a shot of whiskey. TWO WINNERS: A signed copy of All Things Left Wild

Or see below for direct links to participating blogs: