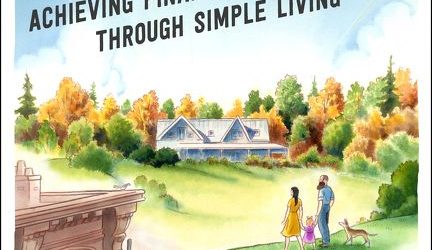 About the book Meet the Frugalwoods: Achieving Financial Independence through Simple Living The deeply personal story of how award-winning personal finance blogger Elizabeth Willard Thames abandoned a successful career in the city and embraced frugality to create a more meaningful, purpose-driven life, and retire to a homestead in the Vermont woods at age thirty-two with her husband and daughter.

In 2014, Elizabeth and Nate Thames were conventional 9-5 young urban professionals. But the couple had a dream to become modern-day homesteaders in rural Vermont. Determined to retire as early as possible in order to start living each day—as opposed to wishing time away working for the weekends—they enacted a plan to save an enormous amount of money: well over seventy percent of their joint take home pay. Dubbing themselves the Frugalwoods, Elizabeth began documenting their unconventional frugality and the resulting wholesale lifestyle transformation on their eponymous blog.

In less than three years, Elizabeth and Nate reached their goal. Today, they are financially independent and living out their dream on a sixty-six-acre homestead in the woods of rural Vermont with their young daughter. While frugality makes their lifestyle possible, it’s also what brings them peace and genuine happiness. They don’t stress out about impressing people with their material possessions, buying the latest gadgets, or keeping up with any Joneses. In the process, Elizabeth discovered the self-confidence and liberation that stems from disavowing our culture’s promise that we can buy our way to “the good life.” Elizabeth unlocked the freedom of a life no longer beholden to the clarion call to consume ever-more products at ever-higher sums.

Meet the Frugalwoods is the intriguing story of how Elizabeth and Nate realized that the mainstream path wasn’t for them, crafted a lifestyle of sustainable frugality, and reached financial independence at age thirty-two. While not everyone wants to live in the woods, or quit their jobs, many of us want to have more control over our time and money and lead more meaningful, simplified lives. Following their advice, you too can live your best life.

About the author, Elizabeth Willard Thames

Elizabeth Willard Thames is the personal finance blogger behind the award-winning Frugalwoods.com. At thirty-two she abandoned a successful career in the city and embraced extreme frugality to create a more meaningful, purpose-driven life and retire to a sixty-six-acre homestead in the woods of Vermont with her husband and young daughter. Started in April 2014, Frugalwoods is a respected voice in the personal finance, early retirement, and lifestyle blogging sector and empowers readers to take charge of their finances and create fulfilling lives. Thames holds BAs in political science and creative writing from the University of Kansas and an MA in public administration from American University. Prior to following her calling as a writer and homesteader, she worked for ten years in the nonprofit sector as a fund-raiser and communications manager.

My husband and I suck at saving. Well, we don’t suck, so much as we rely on retail therapy and have way too much house for two people and four dogs.

It’s because of this that I was initially attracted to reading Meet the Frugalwoods.

I haven’t read the Frugalwoods blog, but in this book Elizabeth Willard Thames has given us something that’s partly an autobiography and partly an object lesson on how to achieve, if not your actual dream, than at least a better level of financial security.

Thames’s voice is simple and accessible. There’s a touch of self-deprecating humor, but mostly she’s pretty no-nonsense. Reading this book doesn’t make you feel like you’ve done everything wrong; rather it gives a different perspective on how you could be managing finances, and I say this as someone who worked in the mortgage industry for half a lifetime, before quitting to write and podcast and do audio drama.

Granted, at 47, I’m a bit out of the Frugalwoods demographic, but I still found Thames’s story inspiring and uplifting, and I think for the millennial generation, especially those on the older end of it, the advice and information shared in Meet the Frugalwoods could be invaluable.

Goes well with a grocery store bagel and cream cheese (but only if your grocery store makes decent bagels), and coffee you brew at home.

Friday, March 9th: I’d Rather Be At The Beach

Monday, March 19th: What Is That Book About

Thursday, March 22nd: Based on a True Story

Melissa A. Bartell @melysse As a teenager in 1980’s California, in a school where a lot of the kids were migrant workers’ kids, I remember the… https://t.co/zuMxgUyTA9