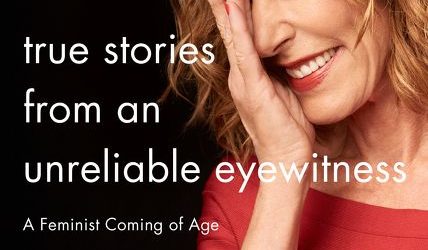 About the book, True Stories from an Unreliable Eyewitness For decades, actress and director Christine Lahti has captivated the hearts and minds of her audience through iconic roles in Chicago Hope, Running on Empty, Housekeeping, And Justice for All, Swing Shift, Law & Order: Special Victims Unit, God of Carnage, and The Blacklist. Now, in True Stories from an Unreliable Eyewitness, this acclaimed performer channels her creativity inward to share her own story for the first time on the page.

In this poignant essay collection, Lahti focuses on three major periods of her life: her childhood, her early journey as an actress and activist, and the realities of her life as a middle-aged woman in Hollywood today. Lahti’s comical and self-deprecating voice shines through in stories such as “Kidnapped” and “Shit Happens,” and she takes a boldly honest look at the painful fissures in her family in pieces such as “Mama Mia” and “Running on Empty.” Taken together, the collection illuminates watershed moments in Lahti’s life, revealing her struggle to maintain integrity, fight her need for perfection, and remain true to her feminist inclinations.

Lahti’s wisdom and candid insights are reminiscent of Nora Ephron’s I Feel Bad About My Neck and Joan Rivers’s I Hate Everyone—and yet her experiences are not exclusive to one generation. The soul of her writing can be seen as a spiritual mother to feminist actresses and comedic voices whose works are inspiring today’s young women, including Amy Schumer, Lena Dunham, Amy Poehler, Caitlin Moran, and Jenny Lawson. Her stories reveal a stumbling journey toward agency and empowerment as a woman—a journey that’s still very much a work in progress.

True Stories from an Unreliable Eyewitness is about the power of storytelling to affirm and reframe the bedrock of who we are, revealing that we’re all unreliable eyewitnesses when it comes to our deeply personal memories. Told in a wildly fresh, unique voice, and with the unshakable ability to laugh at herself time and again, this is Christine Lahti’s best performance yet.

Buy, read, and discuss True Stories from an Unreliable Witness:

About the author, Christine Lahti Christine Lahti is an acclaimed director and stage, television, and film actress with a career that spans over forty years. She won an Oscar for her short film, Lieberman in Love; an Oscar nomination for Swing Shift; a Golden Globe Award for No Place Like Home; an Emmy Award and a Golden Globe Award for Chicago Hope; and an Obie Award for Little Murders. On Broadway, she starred in God of Carnage and The Heidi Chronicles, among many others. Her films include Running on Empty and Housekeeping. Her television shows include Jack and Bobby, Law & Order SVU, and The Blacklist. She lives in New York City and Los Angeles.

When I was a kid, I used to love checking the mail, especially since it meant that I’d get first crack at my mother’s copy of Ms. Magazine. At the tender age of ten, a lot of the material was outside of my experience, but I loved the section at the back called “clicks,” which was a monthly sampling of reader contributions, each describing a moment when feminism, or the need for it, “clicked” into place.

This book, True Stories from an Unreliable Witness, includes many essays that represent similar “clicks” in author Christine Lahti’s life, filtered through her personal experience as an actress and director as well as the fact that perception and memory are incredibly subjective.

Whether she’s talking about a turd incident when she was in first grade, or making a pact with her best friend to remain chaste until marriage (spoiler alert: that didn’t happen),  Ms. Lahti’s writing voice is authentic and engaging. She tells her stories without any Hollywood artifice, and admits that her version of various events are presented the way she recalls them, even if her friends and siblings might have differing accounts (hence the “unreliable witness” qualifier in the title).

While the essays highlighted in the promotional material for this book were wonderful, my favorites were “Losing Virginity,” which is mid-way through the collection, and manages to be sweet, sad, and hilarious, all at once, and “The Smile of Her” which is a textual portrait of Lahti’s mother.

Ms. Lahti was born the same year as my mother, which makes her a Baby Boomer to my solid Gen-X (I was born in 1970), and the difference a single generation can make really struck me. In the afore-mentioned  “Losing Virginity,” Lahti mentions having just read Our Bodies, Ourselves. I’m guessing she had a copy of the same booklet – not much more than a pamphlet, at that time – that my mother eventually passed on to me inside the cover of the dictionary-sized revised edition she gave me for my 21st birthday.

Because these are essays, it’s easy to skip around in the book, reading the titles that intrigue you most before moving on to another, but taken in order of presentation they form a memoir that is witty and wise, funny and frustrating, poignant and powerful. While these glimpses into Ms. Lahti’s life are absolutely her story, at the same time, I feel like they’re every woman’s story, too.

Goes well with a glass of red wine, good bread, sharp cheese, and a small dish of olives.