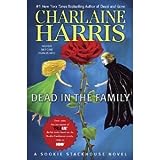 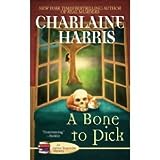 A Bone to Pick
by Charlaine Harris
Get it from Amazon >>

Just as looking at a jumbled pile of Ferrari parts doesn’t hint at the beauty of a finished car, so, too, does the first novel in a series not really give an adequate picture of the entire collection.

I’ve now finished the second in Charlaine Harris’s Aurora Teagarden series, A Bone to Pick, and while I found the first book enjoyable, I’m much more in love with Roe Teagarden in this second installment.

In this book, she inherits a house and a pile of money from her recently-deceased friend Jane, and later finds that she’s inherited a mystery as well. In between dealing with the fact that ex-lover Arthur and his new wife are living across the street from said house (and expecting a baby), and dating the Episcopal priest who performed her mother’s recent marriage ceremony, Roe must also figure out what the mystery is, and why she’s been charged with solving it.

As with the first novel, this book is a cozy story, gentle, and homey, and perfect when it’s raining outside, and you don’t feel very well.

Real Murders
by Charlaine Harris
Get it at Amazon >>

When a friend gave me almost the entire collection of Charlaine Harris’s Aurora Teagarden mysteries to read, I was a little bit leary. After all, this was the same woman who had captured my attention with the Sookie Stackhouse books. How would her earlier series compare?

I had nothing to worry about, at least with book one, Real Murders. It’s the story of a serial killer who is committing crimes and staging them to look like famous murders of the past, and it’s quite entrancing. Already, I’m eager to see what happens next with Aurora “Roe” Teagarden, mild mannered librarian.

In truth, these books are somewhat akin to literary air filters, washing away the fast-paced, sex-laden stories that are so prevalent today (not that I mind sex, really, but, still…) and replacing them with slower, gentler stories where plot and character are explored with a sense of graciousness.

I’ve no idea what I’ll find in book two. But I’m looking forward to the experience.

Technically this should be a Sunday Salon entry, but I slept through half of Sunday, and spent the other half cleaning, so I’m writing a chattery post now because I’m in the middle of half a dozen novels, but not done enough with any to write reviews…yet.

Lately, I’ve been in a mystery mood – everything from the kinds of novels where dead bodies are wrapped up in rugs, to the kinds of novels that are more about puzzles. I’m reading the Aurora Teagarden series, by Southern Vampire Mysteries author Charlaine Harris, but I’m re-reading Laurie R. King’s latest Holmes/Russell novel The Language of Bees as well.

The Teagarden novels actually predate the Sookie Stackhouse series, and while they share the same southern flair, they’re also a bit cozier, and a bit gentler. These are modern mysteries for those of us who still hold Miss Marple and Hercule Poirot fondly in our hearts.

As to Laurie R. King – I reviewed a number of her Holmes/Russell novels this spring, as I was re-reading them all (and filling out my collection) in preparation for the most recent book. She writes amazingly plausible Holmes situations, adding a sidekick/wife/colleague who blends perfectly into the world.

Don’t believe me? Check out this trailer for the most recent book:

Dead and Gone
Charlaine Harris
Get it at Amazon >>

In this, the ninth novel in the Sookie Stackhouse mysteries, and the second to take place post-Katrina (unlike the HBO series True Blood, which takes place entirely post-Katrina), we are given lots of big information that we didn’t have before, and we witness some huge events.

The book opens with the Big Reveal – the national coming out day for weres and shape-shifters, and as it happens on tv, it also happens in Sam’s bar, with him displaying his prowess at becoming a collie.

Of course, this light scene is a tease, because we are almost immediately confronted with the sight of Sookie’s brother’s estranged wife strung up – no not on a column of industrial hand wheels – but on a cross.

Of course, Jason is the prime suspect, but Sookie is sure he didn’t do it, and while she tries to solve the mystery – and preserve her own skin – we are treated to a significant amount of information about her great-grandfather the Faerie, and given more than glimpse into Eric’s backstory.

Of course, it’s all wrapped in the fast-paced, quip-laden action and dialogue we’ve come to expect.

Dead and Gone is a fast read…but a good one.