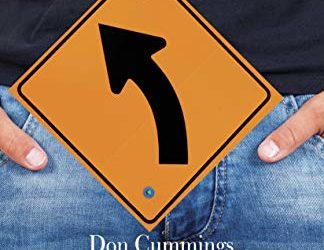 About the book Bent But Not Broken

Bent But Not Broken is an unflinchingly honest memoir about the onset of Peyronie’s disease, a painful and sexually limiting condition that is estimated to affect more than 5% of the worldwide adult male population. Don Cummings writes humorously about the emotional and collateral damage brought on by a suddenly curved penis as he struggles to maintain his sense of sex and self. He openly details the doctor visits, the excruciating treatments, and the acute anxiety over the state of his long-term relationship with a man who is supportive but often helpless in the face of nature’s whims. Discordant domestic life, a harrowing kidnapping by a handsome stranger, and reminiscences of a hyper-active sexual past are woven into the single-minded quest to minimize the effects of this deforming disorder. Brace yourself for a daring, heartfelt and beautifully twisted story of love and survival.

About the author, Don Cummings

DON CUMMINGS is known for his fearless and humorous writing, presented in books, theatre and film. His love-sex-and-health memoir, Bent But not Broken, was released in March, 2019, published by Heliotrope Books. Don Cummings has had short stories published in Cagibi and Epiphany. He often performs his personal essays at venues around the country: Comedy Central’s Sit ‘n Spin, HBO Workspace, Largo, Brooklyn Reading Works, Tell It!, Personal Space and True Story.

His many plays have been produced on both coasts: The Fat of the Land was a semifinalist for the Kaufman & Hart Award for New American Comedy and was published in The Coachella Review. A Good Smoke was a semifinalist for the Eugene O’Neill Playwrights Conference, had a reading at The Public Theater, directed by Pam MacKinnon, with Meryl Streep, Henry Wolfe, Grace Gummer and Debra Monk, and was optioned for Broadway. Piss Play is About Minorities So It’s Really Important, was produced as part of The New York Cringe Festival where it received the Golden Pineapple Award for best play. The Winner was a finalist for The Heideman Award at the Actors Theater of Louisville and was published in Post Road Magazine. His plays, American Air, Stark Raving Mad, Loose Joints and Feed the Children! have been produced in Los Angeles. Box, starring Mink Stole and Lou Liberatore, was an official selection in the Toronto Independent Film Festival, Dam Short Film Festival, New Filmmakers New York Festival, Twin Rivers Media Festival, and was distributed by Shorts International. Oh the Horror!, a graphic novel about zombies, is now live on Instagram and Tumblr @ohthehorrola.

Don Cummings has often appeared on television—most famously as someone’s favorite snarky waiter on Dharma & Greg—and in film, but more frequently on the stage, having performed in over fifty plays. A graduate of Tufts University with a degree in biology and the two-year acting program at The Neighborhood Playhouse School of the Theatre, he spends his days reading, writing, composing music, and helping out other writers. He lives in Los Angeles while adhering to Hawaii’s time zone.

When I was approached to review this memoir, I hesitated, not because of the material, but because whenever I review a memoir, I feel a little like I’m sitting in judgement of the author’s life, rather than the specific work. Ultimately, I chose to read and review Bent But Not Broken because I felt Mr. Cummings’s story should be treated with the same respect and sensitivity we give to every woman who writes about dealing with breast cancer. Just because his memoir has to do with a disease of the penis, doesn’t mean we should be blushing and tittering when we talk about it.

Don Cummings presents his story with wit and candor and no small amount of grace. After reading his bio, I expected the wit. I did not expect to become so personally engaged with his story. I winced with him when he described his physical pain, and worried with him between doctor appointments. I sympathized when his sex life suffered. And I learned a lot about how men – not all, but certainly some – see their penises as representative of their entire identities.

As open, honest, and informative as this memoir is, however, it’s a hard read. At times Cummings is brutally explicit with us and with himself. His pain – both physical and emotional – is palpable. For that reason, this isn’t the sort of memoir you pick up as a casual read when you’re about to hop a plane. It’s the kind of memoir you read with intent, because you’ve heard of Peyronie’s disease, or you know someone who has it.

Goes well with wine and cheese.

Tour Stops for Bent But Not Broken

Tuesday, May 14th: From the TBR Pile

Thursday, May 16th: The Reading Corner For All