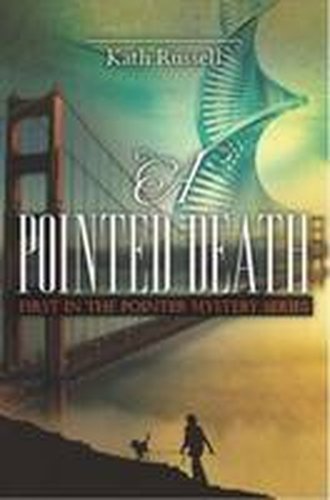 Product Description (from Amazon.com):
In A Pointed Death, biotech consultant Nola Billingsley discovers that one of her clients is stealing proprietary information from other startups. When the scion of a prominent Chinese-American family is murdered, Nola is convinced his death stems from his employment at the company pilfering scientific secrets. Nola seeks the identity of the killer and the destination of the purloined genetic data. Lanky fraud investigator Robert Harrison wants her to leave sleuthing to the professionals and leap in bed with him, but hardheaded Nola is convinced she and her band of biotech pals can solve the mystery. When the going gets tough and danger looms, she has her shorthaired pointer Skootch to watch her back as the action accelerates from lab to ocean’s edge in San Francisco, the city where biotech was born. A Pointed Death is a funny, sexy who-done-it set in a smart industry, a ‘Malice Corporate’ unfolding in a town everyone loves but secretly believes is in need of its own twelve-step program.

When I was offered the opportunity to review Kath Russell’s lighthearted mystery novel, A Pointed Death, I jumped at the chance. I mean, this was a mystery with a female protagonist, that took place in San Francisco (my spiritual, if not actual, home town) and featured a short-haired pointer as a pet/sidekick. As I told the publicist, “I really, REALLY want to read this, and not JUST because I ALSO have a short-haired pointer.” I’m glad I did, because this book was a delightful read from start to finish, and the perfect novel for the post-holiday doldrums – not stupid, but not so intellectual that you find yourself exhausted after three pages.

I really loved Nola Billingsley as a character. She’s strong, spunky, and smart, but she’s also completely feminine, and reads as if she were a real person, rather than a mere character. The scenes between her and her aging-southern-belle mother are priceless (my own mother is not a southern belle, but aging radical feminists aren’t that different when they’re your parents, really), and the relationship Nola has with her bouncy, silly dog, Skootch (who is very much like my own bouncy, silly dog, Maximus) made me laugh not just because of the humor, but because it was dead-on accurate. How many of us have dogs who can smell when we’ve done the horizontal bop, and seem to judge us for it? How many of us with dogs ever get to go to the restroom without an audience?

I also liked Nola’s relationship with Harrison, the cop handling her case. Hardly the stuff of romance novels, it was very much an exploration of how grown-ups respond to chemistry and attraction – sometimes lovely, sometimes awkward, and often frustrating.

The mystery plot was also well-constructed. What seemed at first like yet another embezzlement story ended up touring three cultures: biotech, e-commerce, and Chinese-Americans. All three were fairly represented, and the combination was compelling and interesting all the way through.

This book has a tag implying that Ms. Russell might write more of Nola’s story.
I really hope that’s true.

Goes well with: Clam chowder in a sourdough bowl, and a chilled Anchor Steam beer.