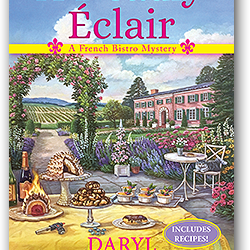 About the book, A Deadly Eclair It’s always been Mimi Rousseau’s dream to open her own bistro, but it seems beyond her grasp since she’s been chased back home to Nouvelle Vie in Napa Valley by her late husband’s tremendous debt. Until her best friend Jorianne James introduces her to entrepreneur Bryan Baker who invests in promising prospects. Now, working the bistro and inn until she’s able to pay it off and call it her own, Mimi is throwing the inn’s first wedding ever.

The wedding will be the talk of the town, as famous talk show host Angelica Edmonton, daughter of Bryan’s half-brother, Edison, has chosen the inn as her perfect venue. Anxious, Mimi is sure things are going to turn south, especially when Edison gets drunk and rowdy at the out-of-towners’ dinner, but by the evening, things begin to look up again. That is until six AM rolls around, and Bryan is found dead at the bistro with an éclair stuffed in his mouth. And the fingers point at Mimi, whose entire loan is forgiven in Bryan’s will.

Now it’s up to Mimi to clear her name and get to the bottom of things before the killer turns up the heat again in A Deadly Éclair, the scrumptious series debut by Agatha Award-winning author Daryl Wood Gerber.

About the author, Daryl Wood Gerber

Agatha Award-winning Daryl Wood Gerber is best known for her nationally bestselling Cookbook Nook Mysteries and CHEESE SHOP MYSTERIES, which she pens as Avery Aames. She will soon debut the new French Bistro Mysteries. Daryl also writes stand-alone suspense: DAYS OF SECRETS and GIRL ON THE RUN. Fun tidbit: as an actress, Daryl appeared in “Murder, She Wrote.” She loves to cook, and she has a frisky Goldendoodle named Sparky who keeps her in line!

I saved reading this book until October, knowing that I’d be writing my review to go live on Halloween, and I ended up reading it while watching the wildfires in California decimate a significant amount of the Napa valley and surrounding areas, which made this lovely, cozy mystery feel just a little bit bittersweet. I can’t help but wonder if the author, Daryl Wood Gerber, will use the fires in future entries into this series.

Brutal reality aside, I really enjoyed this book. Cozy mysteries can sometimes feel too saccharine, but Gerber’s writing is witty and on point, and her plot moved at the perfect pace. True, a wine country wedding in a French bistro is inherently frothy, but she made sure most of the froth was in coffee drinks and on dresses.

Bistro owner-cum-amateur detective Mimi was likeable from the first page, though I felt that some of her interactions while in sleuthing mode were a little bit abrupt. Overall, however, the balance of cooking and questioning was a good one, and the wedding background was the perfect choice for a series opener.

I also really liked Heather, whose no-nonsense style was the perfect counter to Mimi’s self-doubt, Jorianne, her best friend, and Bryan, who, sadly, becomes the victim of the eponymous eclair.

“Go big or don’t go at all,” Mimi is advised by entrepreneur (and uncle of the bride), Bryan Baker, but it would seem that Daryl Wood Gerber received the same advice, because she’s certainly gone big with the launch of her new French Bistro series, giving us a great story full of lively, interesting characters as well as a collection of the recipes used in the novel (as much as I love eclairs, I’m most interested in the onion soup).

Goes well with espresso or cappuccino and either a raspberry  sour cream tart (see the book for recipe).