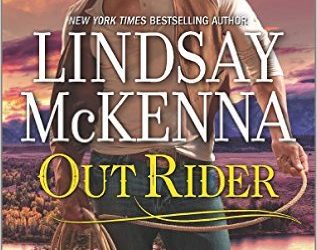 About the book,  Out Rider Mass Market Paperback: 368 pages Publisher: HQN Books (April 26, 2016) With her return to Jackson Hole, Wyoming, New York Times bestselling author Lindsay McKenna shows how love can find a way out of the darkness…  A fresh start—that’s all Devorah McGuire wants. As a former Marine and current Ranger with the […]

About the book,  Night Hawk Series: Jackson Hole, Wyoming Mass Market Paperback: 384 pages Publisher: HQN Books (December 29, 2015) ONCE UPON A RANCH IN WYOMING… After losing his comrade, Sergeant Gil Hanford thought a visit to the man’s widow would be the decent way to honor his late friend. But Gil found more than comfort in Kai […]

About the book, Running Fire Mass Market Paperback: 384 pages Publisher: HQN Books (April 28, 2015) He was a haven in the midst of Hell… Temporarily assigned to the Shadow Squadron in a troubled region of Afghanistan, Chief Warrant Officer and pilot Leah Mackenzie is no stranger to conflict—even if most of her physical and emotional scars […]

The Restaurant Critic’s Wife, by Elizabeth LaBan  (7 January) Sherlock Holmes and the Mummy’s Curse, by Stephanie Osborn (8 January) The Past, by Tessa Hadley (13 January) The Readers of Broken Wheel Recommend, by Katarina Bivald (19 January) Girl Through Glass, by Sari Wilson (26 January) Night Hawk, by Lindsay McKenna (27 January) The Lady’s […]

House Broken, by Sonja Yoerg The Divorce Diet, by Ellen Hawley Dreaming Spies, by Laurie R. King After the War is Over, by Jennifer Robson Island Fog, by John Vanderslice All That Glitters, by Michael Murphy One Step Too Far, by Tina Seskis Veronica Mars: Mr. Kiss and Tell, by Rob Thomas Star Trek – […]