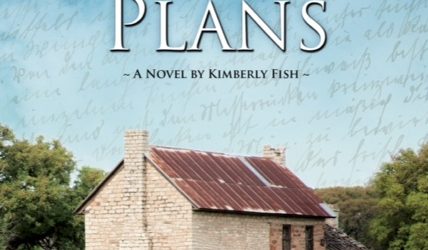 About the book, Comfort Plans Colette Sheridan is being remodeled.

As a San Antonio architect, she’d have vowed her career was to investigate the history and create new functions for the structures everyone else saw as eyesores. The old German farmhouse in Comfort, Texas, might be the screeching end of that dream job. The assignment seemed so ideal at the start; generous clients, a stunning location, and a pocketful of letters that were surely meant to explain the ranch’s story. All that goodness crashed louder than a pile of two-by-fours when her grandfather announced he’d lured Colette’s ex-husband back to San Antonio to take over the family architecture firm. Now, not only does Colette have to endure the challenges posed by Beau Jefferson, the client’s handpicked contractor, a house that resists efforts to be modernized, and letters that may hold the secret to buried treasure, but she also has to decide if she has the courage to fight for her future.

Set against the backdrop of the Texas Hill Country, Colette and Beau have to rely on plans neither of them constructed in order to navigate the changes of a house with a story to tell, and a future they couldn’t even imagine.

About the author, Kimberly Fish

Kimberly Fish started writing professionally with the birth of her second child and the purchase of a home computer. Having found this dubious outlet, she then entered and won The Writer’s League of Texas manuscript contest which fed her on-going fascination with story crafting. She has since published in magazines, newspapers, and online formats and in 2017, released the first novel in a series set during the World War II years in Longview, Texas—The Big Inch. She lives with her family in East Texas.

There’s often a fine line between contemporary fiction and romance. That’s not a bad thing, but it bears mentioning that while this novel, Comfort Plans has elements of romance (and two hot male leads in Julian and Beau) but it is really Collette’s story, the story of a woman who must face herself, face her choices, and face the new paths that life is offering her.  As such, it’s a bit deeper, a bit more reflective than traditional ‘romance’ novels.

Author Kimberly Fish has a writing style that feels fast and fresh. There is nothing unpolished or simple about this story, but she makes you feel like her words flowed effortlessly from her keyboard to your eyes. Collette feels dimensional, and as a reader, sympathizing with her struggles seems as natural as offering your best friend a reassuring hug and a glass of Merlot after a rough day.

I liked that Fish set up this novel so that Collette had to face the internal struggle of her own lack of confidence, as well as the external one of her ex-husband, and the prickly contractor she must work with. I liked that her strength ultimately was very real, and very human. Writing imperfect, but relatable characters is a skill that some authors take several novels to hone. Fish has already mastered it, and it was a pleasure to read her words. I especially appreciated the way she never wrote in dialect, but the Texas accent came through in her character’s dialogue even so. Again, it takes a deft hand to pull that off.

If you want a story that is equal parts comfort-read and woman-coming-into-her-power, plan on enjoying Comfort Plans. I did, and I’m recommending it to all my friends.

Goes well with BBQ brisket, corn on the cob, and a green salad accented with homegrown tomatoes and peppers.