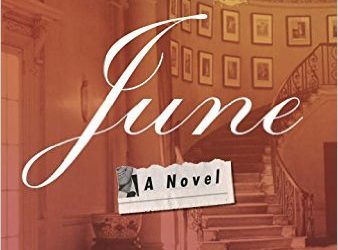 About the book June: A Novel From the New York Times bestselling author of Bittersweet comes a novel of suspense and passion about a terrible mistake made sixty years ago that threatens to change a modern family forever.

Twenty-five-year-old Cassie Danvers is holed up in her family’s crumbling mansion in rural St. Jude, Ohio, mourning the loss of the woman who raised her—her grandmother, June. But a knock on the door forces her out of isolation. Cassie has been named the sole heir to legendary matinee idol Jack Montgomery’s vast fortune. How did Jack Montgomery know her name? Could he have crossed paths with her grandmother all those years ago? What other shocking secrets could June’s once-stately mansion hold?

Soon Jack’s famous daughters come knocking, determined to wrestle Cassie away from the inheritance they feel is their due. Together, they all come to discover the true reasons for June’s silence about that long-ago summer, when Hollywood came to town, and June and Jack’s lives were forever altered by murder, blackmail, and betrayal. As this page-turner shifts deftly between the past and present, Cassie and her guests will be forced to reexamine their legacies, their definition of family, and what it truly means to love someone, steadfastly, across the ages.

I absolutely loved this book. As I told a friend, the writing is perfect capturing the two separate time periods in which the novel takes place, and the language is lyrical. The characters are compelling, and it’s got a bit of everything, romance, friendship, mystery, intrigue, and even a dash of the paranormal (but only a dash).

In many ways, author Miranda Beverly-Whittemore has written two novels, and woven them together in June. In 1955, which is June’s story as seen through Lindie’s eyes, we are treated to a coming-of-age story that involves love, loyalty, and what happens when a Hollywood production takes over your town – and your life. I confess that of those two characters, I preferred Lindie, as she seemed a lot more grounded, and was a breath of fresh air to read. At the end, it’s Lindie who seeped into my brain.

The other story is contemporary: Cassie Danvers has inherited her grandmother’s crumbling old manse, Twin Oaks, and claimed it as a refuge, of sorts, from a bad relationship and a stagnating life. She’s at the point where she has to face her lack of funds when she’s told about another inheritance, this time from the star of the movie that so absorbed Lindie and June (her grandmother) sixty years before. His daughter and her half sister burst her bubble of safety almost immediately, and Cassie must fight to keep the house she so loves, while learning all the secrets of the past.

In anyone else’s hands, this novel would probably descend into Lifetime Movie of the Week territory, where everything is over-the-top. Fortunately, Miranda Beverly-Whittemore’s touch is both delicate and deft. As I said above, she writes with a lyrical ease, and I especially enjoyed the way she handled dialogue.

One convention that I enjoyed, but I know others are less on-board with, is that the novel opens with the house – Twin Oaks – giving its own point of view. As someone who has spent a lot of nights in old houses, I really appreciated that touch. Not only did the house serve as the focal point of the story, but its presence as a character in its own right really became the glue that held each part of the narrative together. It is this dash (and it really is just a dash, the merest hint) that makes this novel edge into magical realism territory, but it’s the same conceit that makes the story so special.

Like Cassie, I wanted to hole up inside Twin Oaks, and breathe life back into the old estate.

Unlike Cassie, I’m sorely lacking obscure, rich, relatives who will leave me their fortunes. This one’s a quickie for the weekend. ONE reader from the US/Canada will get a copy of this book.

Winner will be contacted by me, but fulfillment will be from the publicist for this book, and may take up to six weeks.

MIRANDA BEVERLY-WHITTEMORE is the author of three other novels: New York Times bestseller Bittersweet; Set Me Free, which won the Janet Heidinger Kafka Prize, given annually for the best book of fiction by an American woman; and The Effects of Light. A recipient of the Crazyhorse Prize in Fiction, she lives and writes in Brooklyn.

Monday, May 23rd: All Roads Lead to the Kitchen

Tuesday, May 24th: A Bookish Way of Life

Wednesday, May 25th: A Literary Vacation

Thursday, May 26th: View from the Birdhouse

Monday, May 30th: Buried Under Books

Friday, June 3rd: You Can Read Me Anything