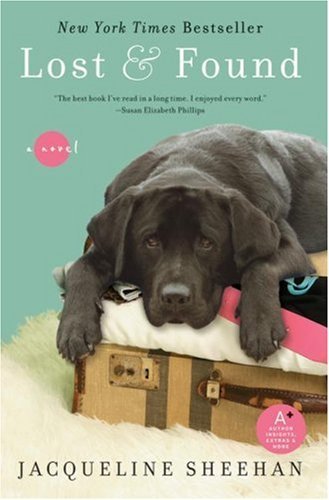 Lost & Found
by Jacqueline Sheehan
Avon, 304 pages
Get it at Amazon >>

Because I’m a sucker for a cute face – especially when the face belongs to a dog with a number like ls4278 instead of a name, there was no way I could pass by the trade paperback edition of Jacqueline Sheehan’s novel Lost & Found. After all, there’s a cute dog on the cover.
.
This dog, however, does not have a number instead of a name. When protagonist Rocky loses her veterinarian husband in the opening chapter, she decides to leave her job as a psychiatric counselor attached to a local university, and moves to a remote island in Maine to become the animal control warden. Once there, she meets Isaiah, the local vet, Tess, the local therapist, and Melissa, a young girl struggling with anorexia. She also meets Lloyd, after rescuing him from behind a dumpster, where he’s nursing the infected wound caused by an arrow.

Lloyd is the dog on the cover, a black lab who eventually serves as the catalyst for healing and change among all the women in the story.

This is a gentle novel, and I’m reading it on vacation, so even though I’m enjoying the story, it’s making me miss my dogs, more.

Goes well with an animal to cuddle.