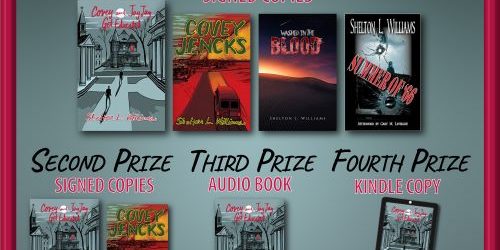 About the book, Covey and JayJay Get Educated Amateur detectives, Covey Jencks and JayJay Qualls, are drawn into a triple murder on the campus of Baker College in West Waverly in the Texas Hill Country. Both end up taking positions at the college: Covey as an adjunct instructor and JayJay as a visiting actor.

Initially they believe that money is the motive for the murders, but over time they learn that the college is a cauldron of political and social intrigue. The college’s new president and his beautiful wife, various staff members, a prominent trustee, and parties not associated with the college have the motives, opportunities, and wacky agendas that might implicate them in the murders. It turns out that a white nationalist group may be using a college house for its nefarious activities, but are they more talk than action?

The West Waverly police are little to no help in the investigation, and Covey himself has to depart the college to deal with his father’s death. JayJay takes over and makes a critical breakthrough. Upon Covey’s return, the couple must rely on deception, a bit of luck, and martial arts skills to solve the crimes and to try to prevent a high-profile assassination. I did a spotlight on the first Covey Jencks novel last year, so the name of the amateur sleuth was not unknown to me, and neither was his creator, Shelton L. Williams, but all I had time to read at the time was the excerpt I posted in the spotlight. While I’m sure reading book one would have benefited me, jumping into book two, Covey and JayJay Get Educated, didn’t make me feel lost or confused at all.

In fact, I was delighted by Williams’s storytelling and his funny, smart, snarky characters from chapter one, where Jenks muses, “How many lawyers does it take to screw in a lightbulb? I don’t know. How many can you afford?”

No, I was more than merely delighted. I was hooked. This story has everything… drama, romance, a murder mystery (as Jay Jay, Jencks’s “partner in business and in life” asks when she first steps onto the page, “Does everyone you know get murdered?” (Apparently not quite…)), the politics of academia, and of course humor.

I’ve read a lot of mysteries over the years, but this is the first book in a long while that has felt so refreshing. Yes, Covey and JayJay are handling serious issues, but they do it without ever taking themselves too seriously.

Author Williams is deft with language, and even better with using his characters to comment on culture and regional idiosyncrasies. Examples include a remark about JayJay being black, and whether that’s an issue for Covey in their town of Odessa, Tx, and JayJay commenting about never having seen a basement. (Having lived in Texas for fifteen years now, I can vouch for the latter: basements here are a rare thing. I can’t speak to the climate of Odessa, though, I’ve never been there.)

But there are other characters beside those listed in the title. Jencks has associates, and there’s a b-plot with M.A. and her partner Beth that is easily as interesting as the main story. As well, this story is incredibly relevant to real life, as it addresses white nationalism as part of the on-campus mystery Covey and JayJay must solve.

Along with his skill at writing dialogue, Williams is adept at pacing, as well. As much as I enjoyed the banter between Covey and JayJay, it was the mystery they had to solve that kept me reading. Each twist and turn was well plotted, and when the ending came, as much as I was satisfied with a well-told story, I also wanted more time with these characters. (I know, I know, I can go back and read book one.)

If you love a mystery, and also love banter worthy of a classic Hepburn and Tracy film, Covey and JayJay Get Educated should be your first choice. Unless you haven’t read book one. Then buy both.

Goes well with: a barbecue bacon burger and a Shiner bock.

FOUR WINNERS!GRAND PRIZE: signed copy of each of the author’s books

SECOND PRIZE: signed copy of both Covey Jencks and

Covey and JayJay Get Educated

THIRD PRIZE: Audio book of Covey and JayJay Get Educated

FOURTH PRIZE: Kindle version of Covey and JayJay Get Educated Check Out the Other Blogs on this Tour