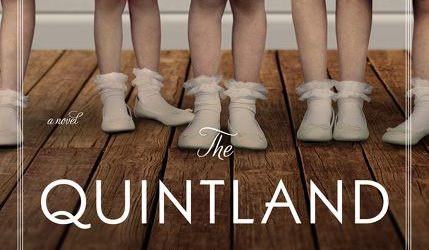 About the book, The Quintland Sisters

“A historical novel that will enthrall you… I was utterly captivated…” — Joanna Goodman, author of The Home for Unwanted Girls

For fans of Sold on a Monday or The Home for Unwanted Girls,Shelley Wood’s novel tells the story of the Dionne Quintuplets, the world’s first identical quintuplets to survive birth, told from the perspective of a midwife in training who helps bring them into the world.

Reluctant midwife Emma Trimpany is just 17 when she assists at the harrowing birth of the Dionne quintuplets: five tiny miracles born to French farmers in hardscrabble Northern Ontario in 1934. Emma cares for them through their perilous first days and when the government decides to remove the babies from their francophone parents, making them wards of the British king, Emma signs on as their nurse.

Over 6,000 daily visitors come to ogle the identical “Quints” playing in their custom-built playground; at the height of the Great Depression, the tourism and advertising dollars pour in. While the rest of the world delights in their sameness, Emma sees each girl as unique: Yvonne, Annette, Cécile, Marie, and Émilie. With her quirky eye for detail, Emma records every strange twist of events in her private journals.

As the fight over custody and revenues turns increasingly explosive, Emma is torn between the fishbowl sanctuary of Quintland and the wider world, now teetering on the brink of war. Steeped in research, The Quintland Sisters is a novel of love, heartache, resilience, and enduring sisterhood—a fictional, coming-of-age story bound up in one of the strangest true tales of the past century. About the author, Shelley Wood

Shelley Wood is a writer, journalist, and editor. Her work has appeared in the New Quarterly, Room, the Antigonish Review, Causeway Lit, and the Globe and Mail (UK). Born and raised in Vancouver, she has lived in Montreal, Cape Town, and the Middle East, and now has a home, a man, and a dog in British Columbia, Canada.

Reality television – or any television – hadn’t been invented yet when the Dionne Quintuplets were born in Canada in 1934, but if it had been, their lives wouldn’t have been any less tragic, or crazy.

Their story, as told by Emma Trimpany, a seventeen-year-old midwife-in-training, is the dichotomy of the the fish and the fishbowl. Inside, Emma sees each of the five “Quintland Sisters”  – ripped from their family by the doctors who saw them as a means to fame and fortune – as a unique person, each with a name, a personality, her own personhood. But to outsiders it’s the similarities that attract, and people come from miles around to gawk at the girls in their specially-built playground.

What struck me about this book, which is a fictional retelling of a true story, is how much the Dionne Quintuplets’ story is so similar to the stories we see today – the OctoMom media frenzy ended up with similar product placement opportunities, and, while not precisely the same, the Hensel twins (the famous conjoined twins) have likewise been media darlings their entire lives.

Wood does an amazing job capturing the period, the Dionne family’s distress and confusion – sure, they’re uneducated and poor, but that doesn’t make them unfit parents. The juxtaposition of Depression-era austerity with the lavishness given to the girls, and not their parents was also quite well shown. I liked the device of using Emily as the point of view character, as she was closer in class to the Dionnes and closer in education to the doctors… she was the perfect betwixt-and-between person to let us see all perspectives.

Overall, I found the story to be unsettling, but I believe that was the intent. It should be unsettling to read about children being treated more like an exhibition than people.

Tour Stops for The Quintland Sisters

Tuesday, March 5th: As I turn the pages

Melissa A. Bartell @melysse @katherinefugate: You know, #HelenReddy died last night and she sang an iconic song that empowered women all over the world to stand up to their abusers and we haven't been able to talk about that because we are all too busy being abused by the President of the United States. #IAmWoman

h J R
Melissa A. Bartell @melysse @HamillHimself: That debate was the worst thing I've ever seen & I was in The Star Wars Holiday Special.

h J R
Melissa A. Bartell @melysse @Caitlineli1 @regalfungi @BrentSpiner You can donate to dem campaigns as Brent suggested up-thread, you can volunteer for those campaigns (I’m text-banking for candidates) or you can have @TrektheVote set you up to help with non-partisan voter outreach. Taking action helps you and others.

h J R
Melissa A. Bartell @melysse @Caitlineli1 @regalfungi @BrentSpiner I feel concern for those people also. I worry so much about what will happen to my LGBTQQIAA+ friends, my BIPOC friends, and my neuro-diverse friends, especially. But while voting is a crucial step, taking action is important as well.

h J R
Melissa A. Bartell @melysse @kathleen_belew: Re "stand back and standby," people who work in monitoring and de-radicalization and otherwise studying white power groups are sounding red alerts and sending emergency signals about increasing violence from now through the election, and after, regardless of winner.