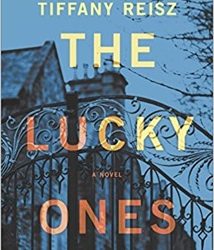 Every so often you stumble across a novel that doesn’t look all that amazing, and then you get into it and you find out it’s compelling, interesting, and really satisfying, and pretty amazing after all.

That was my experience with The Lucky Ones. I was part of the excerpt tour in January, but hadn’t read the book at the time I posted my excerpt. When I finally sat down to start it and read the opening scenes with Allison with her ten-lover McQueen, I was half-convinced I was reading the wrong novel.

But then the story unfolded. Allison read the letter from Roland, and dashed back to the Oregon coast, and not only did I fall in love with the house – The Dragon (I want a house like that, in a place like that)  – but I was hooked on the story.

I really liked the way the author, Tiffany Reisz, crafted this novel like a romance, until it became a thriller disguised as a family drama with romantic interludes. I loved all the characters, flawed and human as they were. The layers of secrets, peeling away like onions, kept me intrigued til the very end.

Reisz’s use of language is really effective. Allison was the point of view character, so her voice was the clearest, but each character had his or her own distinct voice – Roland was suitably introspective. Dr. Capello reminded me of an older, gritter version of Alan Alda, and Thora was someone I’d have loved to hang out with.

Overall, it’s we, the readers, who are lucky, because we get to read The Lucky Ones.

Goes well with a burger and a beer, enjoyed on a beach blanket on the sand.

The Lucky Ones Review Tour:

Monday, February 12th: Into the Hall of Books and @intothehallofbooks

Friday, March 2nd: Not in Jersey

Friday, March 9th: Thoughts on This ‘n That

Friday, March 9th: What is That Book About