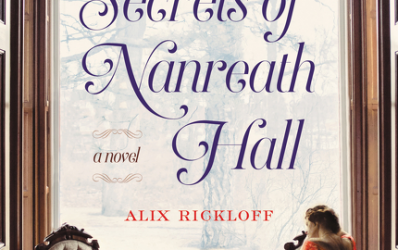 About the book, Secrets of Nanreath Hall This incredible debut historical novel—in the tradition of Beatriz Williams and Jennifer Robson—tells the fascinating story of a young mother who flees her home on the rocky cliffs of Cornwall and the daughter who finds her way back, seeking answers.

Cornwall, 1940. Back in England after the harrowing evacuation at Dunkirk, WWII Red Cross nurse Anna Trenowyth is shocked to learn her adoptive parents Graham and Prue Handley have been killed in an air raid. She desperately needs their advice as she’s been assigned to the military hospital that has set up camp inside her biological mother’s childhood home—Nanreath Hall. Anna was just six-years-old when her mother, Lady Katherine Trenowyth, died. All she has left are vague memories that tease her with clues she can’t unravel. Anna’s assignment to Nanreath Hall could be the chance for her to finally become acquainted with the family she’s never known—and to unbury the truth and secrets surrounding her past.

Cornwall, 1913. In the luxury of pre-WWI England, Lady Katherine Trenowyth is expected to do nothing more than make a smart marriage and have a respectable life. When Simon Halliday, a bohemian painter, enters her world, Katherine begins to question the future that was so carefully laid out for her. Her choices begin to lead her away from the stability of her home and family toward a wild existence of life, art, and love. But as everything begins to fall apart, Katherine finds herself destitute and alone.

As Anna is drawn into her newfound family’s lives and their tangled loyalties, she discovers herself at the center of old heartbreaks and unbearable tragedies, leaving her to decide if the secrets of the past are too dangerous to unearth… and if the family she’s discovered is one she can keep.

About the author, Alix Rickloff Alix Rickloff is a critically acclaimed author of historical and paranormal romance. Her previous novels include the Bligh Family series (Kensington, 2009), the Heirs of Kilronan trilogy (Pocket, 2011), and, as Alexa Egan, the Imnada Brotherhood series (Pocket, 2014). She lives in Chestertown, Maryland, with her husband and three children.

In Secrets of Nanreath Hall, author Alix Rickloff gives us an interesting well-written historical novel that takes place in two time periods without the use of time travel.

Instead, we meet Lady Katherine (Kitty) first as she’s announcing to her close friends that she’s been diagnosed with cancer, and doesn’t have much time left, and later in alternating chapters that flash back to show us her personal history. Her story is set against the backdrop of World War I, and we follow her constant straining against the society family she was born into and her love for an artist who paints her the way he sees her, but dies far too soon.

We also meet Anna, Kitty’s daughter, who is serving as a  Red Cross nurse. Her story is also set during wartime, World War II, and her chapters have a snap and sparkle to them that the Kitty sections do not, which fits the energy of the time.

Of the two women, it’s difficult to say which is stronger. Anna is certainly more self-sufficient, but Kitty is more unconventional, and yet, Rickloff makes them undeniably mother and daughter, even though Anna loses her mother when she is only six.

Both women have stories that involve coming of age, losing family, and finding their right place in the world. Kitty’s is more languid, especially as we know her ultimate end – dying essentially alone – from the beginning. Almost, it feels like lassitude slowly creeps into her story.  Conversely, Anna’s story increases in tempo as it goes on. Her early scenes paint her as very much a lost lamb, having just lost her guardians in an air raid.

There are other characters in this story of course. Kitty’s lover (and Anna’s father) the painter Simon Halliday is one. Anna’s cousin Hugh and friend Tilly are others. These characters are well drawn, each with their own flaws but they serve to highlight the women at the heart of the novel.

A final character is the family manse, Nanreath Hall, a house that has been conscripted for use as a convalescent home – the house where Anna is assigned. If the actual secrets held by the Hall were somewhat predictable, it wasn’t a detractor. The novel is so well written that even the predictable is a delight to read.

While this book will most appeal to Anglophiles and people who love historical novels, I think it would suit a broad variety of readers.

Goes well with warm pastry and hot tea, or maybe a splash of brandy.

Melissa A. Bartell @melysse @jilevin: How should we understand science? https://t.co/G0VJx31Xyp